Ontario is the early front-runner in the race for the 2012-13 Dominion MA Cup, presented by TSN. 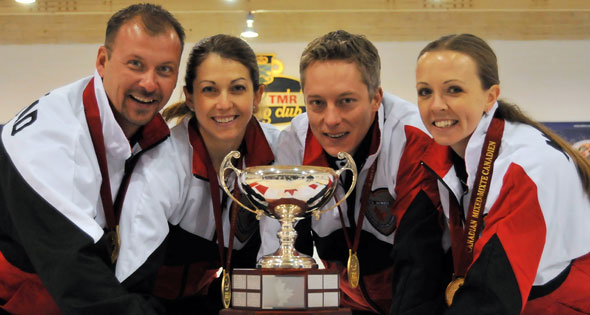 Team Ontario’s victory at the Canadian mixed championships is a big reason why that province is on top of the standings in the Dominion MA Cup, presented by TSN. (Photo, CCA)

The annual competition measures the performance of each of the Canadian Curling Association’s 14 Member Associations (10 provinces, three territories and Northern Ontario) at all CCA-operated and sanctioned national championships, with the winner being awarded the Dominion MA Cup, presented by TSN at the CCA’s National Curling Congress in June.

As well, the Member Association that posts the biggest year-to-year improvement will be presented with the Governor’s Cup. After the conclusion of the M&M Meat Shops Canadian Junior Men’s and Women’s Curling Championships this past weekend in Fort McMurray, Alta., Ontario’s Jamie Sinclair finished third in the women’s competition while Aaron Squires was fourth in the men’s competition. Combined with a victory by Cory Heggestad at the Canadian mixed championship in Montreal, Ontario is averaging a leading 12.333 points per event (14 points goes to the winner; 13 points to the runner-up, 12 to the bronze-medallist and so on until the 14th-place finisher earns a single point). Nova Scotia now sits second with an average of 11 points even (runner-up at the mixed, third at the junior men’s, seventh in the junior women’s), while Manitoba has charged up to third place (10.667 points) from 10th after the mixed with a victory in the junior men’s by Matt Dunstone and a runner-up finish by Shannon Birchard in the junior women’s. Also making an upward move was British Columbia, now in fifth at 9.667 points thanks to Corryn Brown’s victory in the junior women’s. Defending Dominion MA champion Alberta currently sits in seventh place at 8.667 points. The standings, available at www.curling.ca/membership/the-dominion-ma-cup/, will be updated immediately following the conclusion of the 2013 Scotties Tournament of Hearts, which begins on Saturday at the K-Rock Centre in Kingston, Ont.