Team Canada, Ontario and Manitoba stay on top after Draw 7

At the start of Draw 7, four undefeated teams sat at the top of the standings. When the rocks came to rest, there were only three, thanks to Suzanne Birt’s surging P.E.I. team, who earned a decisive 12-7 victory over Saskatchewan’s Jill Shumay in Monday night action at the K-Rock Centre in Kingston. “We stunk out the joint tonight,” said Shumay. “They played really well and we didn’t.” The loss was a disappointment, especially after Saskatchewan’s tense last-rock win over Alberta earlier in the day, but Shumay took it in stride. 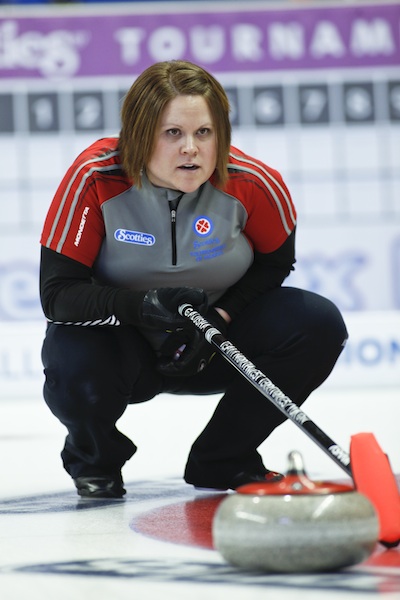 Kerry Galusha of Northwest Territories/Yukon and her team from Yellowknife have struggled with consistency at the 2013 Scotties. (Photo CCA/Andrew Klaver)

“We’re still 4-and-1, so it’s still looking good,” she said. “We’re right where we want to be.” “It feels good,” said Birt about being the first to knock off one of the undefeated teams at the top of the standings. “We had a lot of rocks in play that game, and a lot of points scored. We’re just feeling a lot better each and every game.” Kerry Galusha of Team Northwest Territories/Yukon, sitting at 1-3 coming into the evening draw, faced former Scotties and world champion Jennifer Jones of Manitoba, who was coming off a decisive 11-4 win over Nova Scotia in the afternoon draw. But if Jones was expecting a walkover, the team from the Yellowknife Curling Club had other ideas, putting in a strong effort through the first five ends and heading to the break down only 3-1 and keeping the game close – until the tide turned in the sixth end. Manitoba stole three straight ends on the way to a 9-1 win and a 5-0 record. “We did play better tonight than what we have been,” said Galusha. “Our goal for tonight was just to come out and try to play better, try to execute better. I don’t think the score really shows how we played. We had a bit of bad luck out there as well, so (we’ll) come out firing tomorrow and just try to get better.” In other action, undefeated Heather Nedohin and Team Canada overwhelmed Newfoundland and Labrador’s Stacie Devereaux 10-3 in seven ends, and Rachel Homan had her hands full against Andrea Crawford’s New Brunswick foursome. In the tenth, facing three Ontario counters without hammer, Crawford came up short on her draw, allowing Homan to score two for a 7-5 win. The Scotties continues on Tuesday with draws at 2 p.m. and 7 p.m. (all times EST). All draws are being broadcast by TSN/RDS, the official broadcast partner of the Season of Champions. Live scoring, statistics and updated standings are available at https://www.curling.ca/championships/scotties/draw-schedule/scores-and-standings/ httpvh://www.youtube.com/watch?v=3X3Faz15B5o