B.C. and New Brunswick keep their eyes on playoff positions

On the last day of round robin play at the 2013 Scotties Tournament of Hearts, all eyes were on playoff positions – especially the eyes of B.C.’s Kelly Scott and New Brunswick’s Andrea Crawford. A win for Scott would bring her closer to the top three – Manitoba (9-0) is secure at the top of the standings, followed by Ontario (8-1) and Team Canada (7-2), all of whom had the morning off. Kelly Scott’s B.C. foursome (Jeanna Schraeder, Sasha Carter and Sarah Wazney) faced Kerry Galusha of the Northwest Territories/Yukon (1-8), who won’t be heading to the playoffs, but who – like other teams with five losses or more – can act as spoilers. And Galusha came close. In the seventh end, her tap rolled too far, leaving Scott with a steal of one and an 8-5 lead. But the team from Yellowknife stole a single in the ninth and trailed 8-7 heading into the tenth, without hammer, eventually losing 9-7 and propelling B.C. closer to a secure playoff position. “That was a battle out there,” said Scott. “Kerry had a real good game against us and we had a few ends set up that she made some great draw shots to not let us score multiple points and put the game away, so it was close right to the end and good test for us.” httpvh://www.youtube.com/watch?v=SF8HQm83yKY For New Brunswick, tied with Saskatchewan at 5-4 and sitting in fifth place, a win meant staying close enough for a run at a playoff spot. Crawford and her team from the Gage Golf and Curling Club in Oromocto faced Nova Scotia’s Mary-Anne Arsenault. With a playoff position on the line, Crawford rose to the challenge, curling at 100 percent as a team through the first three ends, and keeping the pressure on for an 8-6 win. Lead Jodie deSolla was a big factor, curling 99 percent in the game. “That means a lot,” said Crawford about her team’s performance in front of her. “Obviously that means we’re getting set up and should make the shots a little bit easier in the end, so that’s huge.” “That was a great game for us today,” said Crawford. “We really did build on yesterday, so we’re feeling great at this point.” 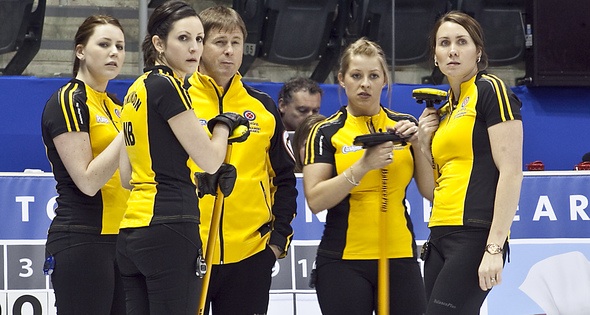 The two other games on Friday morning involved teams who are out of playoff contention. Newfoundland and Labrador’s Stacie Devereaux needed an extra end to defeat Quebec’s Allison Ross 8-7, and Prince Edward Island’s Suzanne Birt scored an 8-6 decision over Alberta’s Kristie Moore. The Scotties continues on Friday with draws at 2 p.m. and 7:30 p.m. (all times EST). All draws are being broadcast by TSN/RDS, the official broadcast partner of the Season of Champions. Live scoring, statistics and updated standings are available at https://www.curling.ca/championships/scotties/draw-schedule/scores-and-standings/