Ontario through to final after defeating Manitoba in Page playoff

In their only meeting of the round robin, Manitoba’s Jennifer Jones came out on top of a 9-7 score. But in the Page Playoff between the top two finishers, at the 2013 Scotties Tournament of Hearts, Ontario’s Rachel Homan evened the score, stealing her way to an 8-5 win. The first end showcased the fearless – and aggressive – style of the young team from Ontario. Taking advantage of a few small misses by Manitoba, Homan was sitting three when Jones’s hit-and-roll attempt was redirected by a guard and slipped through the house. On her last shot of the first, facing four, Jones missed again, removing one rock and rolling too far, giving up a steal of two – and igniting the pro-Ontario crowd. 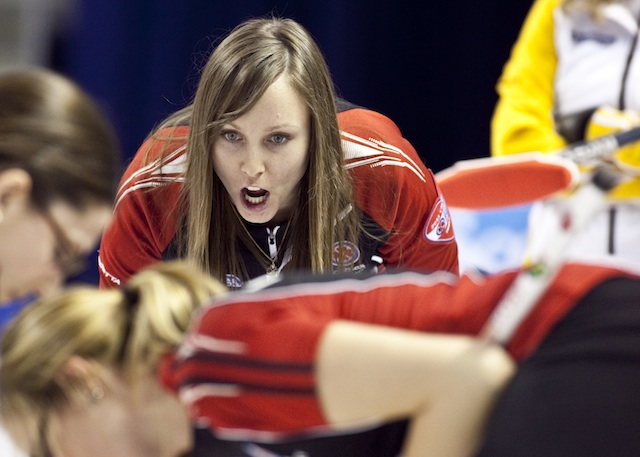 From that point, it was game on, with both teams applying pressure, and Ontario just holding the advantage on rock placement and execution. By the fifth end break, Ontario led on the scoreboard 5-3. The turning point of the game may have been the sixth, when Jones jammed on a double attempt, leaving Homan the steal of one. In the seventh, Jones made a spectacular triple, but her last-rock draw slid too far, giving Homan another steal and a 7-4 lead. “I just got fooled a little bit on the ice,” said Jones. “I thought we figured it out a little bit too late. I wasn’t as sharp as I needed to be early, so hopefully we’ll bounce back and play better against Team Canada tomorrow.” For Homan, the win means Ontario is through the to final on Sunday night. The skip gave full credit to her teammates, Emma Miskew, Alison Kreviazuk and Lisa Weagle. “Full team effort,” Homan said. “We went at them right away (with) tons of rocks in play the whole way. The crowd was into it and my team played amazing.” Jones will now meet Heather Nedohin’s Team Canada in the Semifinal on Sunday morning at 9 a.m., with the chance to meet Homan yet again in the Final. The Scotties continues with the Semifinal on Sunday at 9 a.m., the Bronze Medal game at 2 p.m. and the Final at 7 p.m. (all times EST). All draws are being broadcast by TSN/RDS, the official broadcast partner of the Season of Champions. Live scoring, statistics and updated standings are available at https://www.curling.ca/championships/scotties/draw-schedule/scores-and-standings/ httpvh://www.youtube.com/watch?v=aXRq9XnPplc