Kelly Scott was determined to put the most recent losses behind her and focus on winning instead, and that’s what she and her B.C. team did – defeating Heather Nedohin and Team Canada to win the bronze medal at the 2013 Scotties Tournament of Hearts on Sunday afternoon. 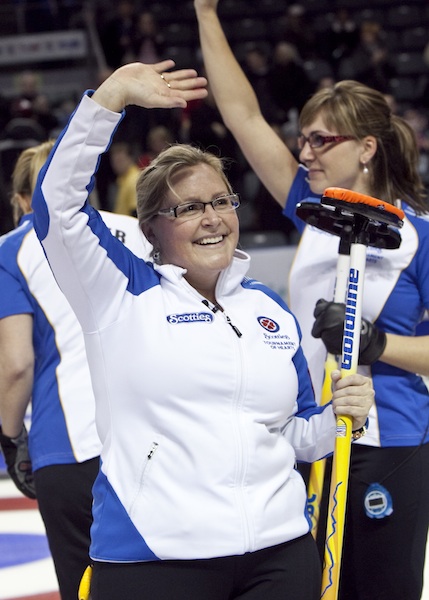 It was a game of offence right from the start. Scott and her B.C. teammates Jeanna Schraeder, Sasha Carter and Sarah Wazney took their deuce in the first end on a perfect draw to the button, but Nedohin answered with a blank and a score of four in the third end on a B.C. mistake. After the break, tied 5-5, the teams kept the offence going. In the seventh, Scott needed to make an angle raise to remove at least one Team Canada counter, and when the rocks came to rest, B.C. was lying three – for an 8-5 lead. But Nedohin came back with a three points of her own when Scott’s tap-back was too strong and bounced open. Leading 9-8, with two B.C. rocks in the four foot, Scott could only watch as Nedohin attempted the double for the win, but the Team Canada rock spun out, giving B.C. the 10-8 victory and the bronze medal. For Nedohin, it was a disappointing day after losing the semifinal earlier to Jennifer Jones. But she praised B.C. on their performance and had no complaints about the way her team played. “I thought we played very well today,” she said. “It’s a tough turnaround point in an hour to get back out and play again, but I thought we played very well and it was great game.” Scott was thrilled with the win. After losing the Page 3 vs 4 playoff, she had made it clear that Team B.C. was eager to play in the bronze medal game, especially since it was lead Sarah Wazney’s first trip to the Scotties. “We are so happy, so pleased,” said Scott. “This team, really our first year together with Sarah in the mix, and (with) her difficulties with food poisoning this week – we’re super proud to get the chance to play for the bronze medal. It was a battle and we had to work for it. We’re proud for Sarah, and we’re proud for B.C.” “This is fantastic,” said an excited Wazney after the game. “I can’t stop shaking right now.” But she insisted she was not the team’s focus. “I said let’s not just play it for me. Let’s play it for us,” she said. “And on a good note. Let’s go out there and play a good one, our last one.” The Scotties continues on Sunday night with the final between Jennifer Jones (Manitoba) and Rachel Homan (Ontario) at 7 p.m. (EST) on TSN/RDS2, the official broadcast partner of the Season of Champions. Live scoring, statistics and updated standings are available at https://www.curling.ca/championships/scotties/draw-schedule/scores-and-standings/ httpvh://www.youtube.com/watch?v=4jsDe1FfsIw