Kamloops is thinking big for the 2014 Tim Hortons Brier

When the 2014 Tim Hortons Brier was announced for Kamloops on Oct. 30 of last year, it was hailed as a big win for the community. Now, with full event passes for the Canadian Men’s Curling Championship going on sale Feb. 28 at 10 a.m. PST, the message is more about buying early. “This is a relatively small venue for the Brier,” said Host Committee Chair Norm Daley. “So curling fans have to realize that they have to act fast before it is too late.” 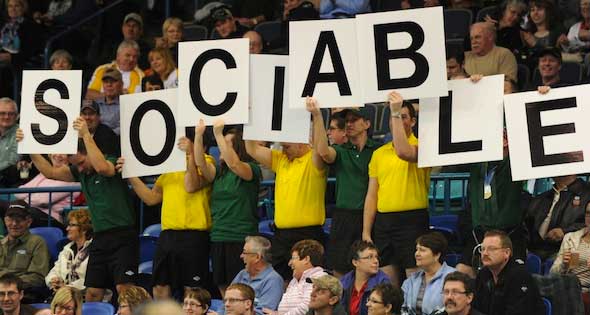 If you want to be at the party in Kamloops, B.C., for the 2014 Tim Hortons Brier, you’d better buy your tickets early. (Photo, CCA/Michael Burns)

The Old Classic full event pass, including a guaranteed seat for all 22 draws of exciting action, is priced at just $499. And, for the first time ever at the Interior Savings Centre, curling fans can select their exact seats online at curling.ca/tickets with the click of a button. The full event package can also be purchased by phone at 1-877-985-2875. The Old Classic delivers the full experience of live championship curling, including complimentary admission to the Patch – where fans, competitors, sponsors and event volunteers gather to celebrate the social side of the sport. The Patch, situated in the Kamloops Curling Club, offers a tasty selection of food and beverages and a lineup of live entertainment featuring some of the hottest bands in the land. It’s also the place to meet all the athletes at Up Close and Personal interviews and Team Autograph sessions. On top of all that, fans can sign up for a championship of their own in the Cool Shots competition – with the chance to win cash prizes in the tabletop version of the roaring game. While the Brier is normally held in arenas with seating capacities in excess of 10,000, Kamloops’ record of success in generating new interest in the sport of curling was reason enough for the Canadian Curling Association to make a return visit. The Canadian curling classic will take place March 1-9 in the Interior Savings Centre, the scene of the 1996 Brier where Jeff Stoughton defeated Kevin Martin in the championship final to win his first national title.