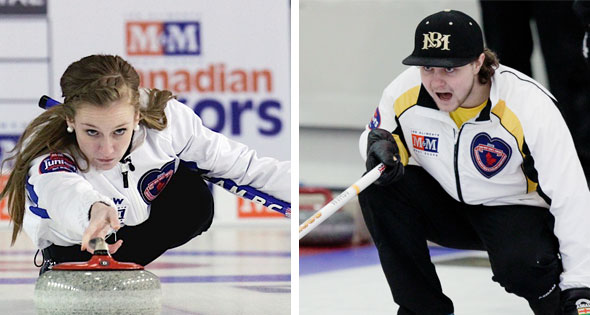 The World Juniors, which will conclude on March 10, are serving as the official test event for the 2014 Winter Olympic Games. The Canadian men’s team — rounded out by third Colton Lott, second Daniel Grant, lead Brendan MacCuish, alternate Josh Barry and coach Scott Grant — opens with a pair of games on Thursday — Canada plays Switzerland’s André Neuenschwander at 9 a.m. Sochi time (midnight EST) and then is up against Russia’s Evgeny Arkhipov at 7:30 p.m. Sochi time (10:30 a.m. EST). Dunstone, 17, will be making his international debut, and will be seeing his opponents for the first time in Sochi. “I’ve talked to Evan Assmussen (who played third for Brendan Bottcher’s Canadian team that won the world junior title last year in Östersund, Sweden) and he’s given me the heads-up on some of the teams to beat,” said Dunstone. “(2012 bronze-medallist) Kyle Smith of Scotland, Korey Dropkin of the United States, Sweden, Norway — we know nothing is going to be easy going there. We’re just hoping to go in there with the same mindset we had at Canadians. If we go out and play to our strengths like we did in the final, we believe we can win our fair share of games. We’ll go out with the mindset of playing our own game.” The Canadian women — third Erin Pincott, second Sam Fisher, lead Sydney Fraser, alternate Cathlia Ward and coach Ken Brown round out the team — have just one game on Thursday, at 2 p.m. Sochi time (5 a.m. EST) against Denmark’s Stephanie Risdal Nielsen. “There’ll definitely be a target on our back (as Team Canada), but three girls from the champions from last year (Scotland’s Hannah Fleming) will be there, so I think the pressure will be off us a little bit. But there will be some eyes watching us. I guess we’re expected to do well, but we can’t let that pressure get to us.” Canada has won a leading 17 world junior men’s titles since 1975 and eight women’s crowns (one behind Scotland) since 1988. The last Canadian teams to win world junior titles were skipped by Saskatchewan’s Marliese Kasner (Miller) in 2003 in Flims, Switzerland, and by Bottcher last year. Schedules and live scoring for the 2013 World Juniors are available at: wjcc2013.curlingevents.com/