Capital One Rocks & Rings: All in the family

The Capital One Rocks & Rings program recently spent three days at Lester B. Pearson School in Aurora, Ontario. For one student – the only curler in the school – this was a chance to spread the word about the game he loved and hopefully recruit some friends to form a school curling team. Here’s his account of the day. 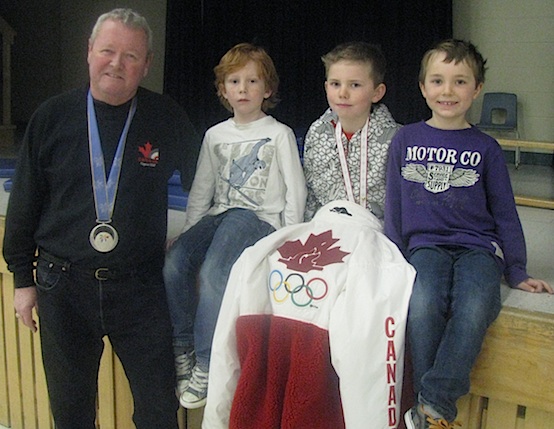 My name is Wyatt, and I’m in Grade 4 at Lester B. Pearson PS in Aurora, Ont.  When I heard that Rocks & Rings was coming to my school, I was excited.  I told my friends, and they told me that curling wasn’t a good sport and they didn’t want to play it.  Once the day came for Rocks & Rings to be at our school, I hoped they would change their mind.  My grandpa Paul came to the school that day as well.  He talked about how he started curling as a kid, and the great prizes he won and how much fun he had.  He passed around his Olympic medal, and everyone was interested in it.  My teacher, Mme Bosse, asked the class if they had ever held a real Olympic medal, and they said no.  Abbie, the instructor, asked us some questions about curling to see what the class knew about it, and I was the only one who knew the answers.  Then she split us up into two groups, and my group played “Red Light Green Light” but with brooms.  I got to hold up the sign that said “Whoa” and “Sweep”.  Then we went to the next station and threw the rocks and played a game.  We played three ends.  Then she brought the whole class together and we had a shootout.  The best shot of the day was the last one, by my teacher!  We came back to our class after, and my friends came up to me and asked how they could start curling for real because it’s a fun sport.  My friend Max is coming out to my curling club this Sunday, so he can try it out on ice this time!” The “Grandpa Paul” that Wyatt refers to is, of course, none other than Olympian and World Champ Paul Savage. The kids had a great time listening to him and seeing his Olympic medal. “I wasn’t sure what to expect when I was asked to participate in a Rocks & Rings event at my grandsons’ (three of them) school, Lester B. Pearson,” said Paul. “What a pleasant surprise! The program was well organized, well run, interesting from start to finish and the enthusiasm of the students was amazing, they had a ball!! Congratulations to Capital One and the Rocks & Rings staff for a great program that introduces the sport of curling to thousands of kids every year. It was a pleasure to be a part of it.”