One of the most experienced and accomplished fields in the history of the Canadian Men’s Curling Championship opens play on Saturday at Rexall Place in Edmonton in the 2013 Tim Hortons Brier, presented by Monsanto. Olympic champions, world champions and Canadian champions are part of the field that will battle for the right to wear the Maple Leaf at the 2013 Ford World Men’s Curling Championship, presented by Booster Juice, beginning on March 30 in Victoria, B.C. 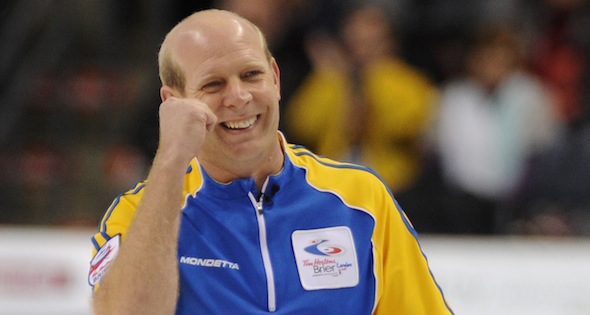 Kevin Martin will be trying to win his record fifth win at the Tim Hortons Brier as a skip. (Photo, CCA/Michael Burns)

Heading the field will be hometown favourite Kevin Martin and his team from the Saville Centre. Joined by teammates third John Morris, second Marc Kennedy and lead Ben Hebert — the same team that captured gold at the 2010 Winter Olympics in Vancouver — Martin will be chasing history, seeking to become the first skip to win five Brier titles (he currently shares the record of four with Randy Ferbey and Ernie Richardson) in addition to becoming the first skip to win Brier titles in three different decades. Martin won his first Brier in 1991 at Hamilton, and also won in 1997 at Calgary, 2008 at Winnipeg and a year later at Calgary. 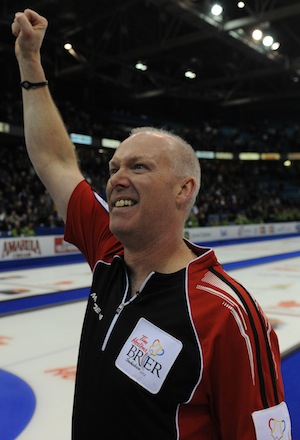 But Martin will be pushed hard on home ice. Also in the field is defending Brier and world champion Glenn Howard of Ontario, who’ll be making his record 15th Brier appearance; he’d shared the record of 14 with his older brother Russ. Howard, third Wayne Middaugh, second Brent Laing and lead Craig Savill, from the Coldwater and District Curling Club, will be trying to earn back-to-back Brier titles for Ontario for the first time in that province’s history. Also in the field is 2011 Brier and world champion Jeff Stoughton of Winnipeg, who is representing Manitoba for the 10th time. Stoughton, third Jon Mead and second Reid Carruthers are back from that 2011 team, while lead Mark Nichols is making his Brier debut for Manitoba, although he’s hardly a rookie, having won eight Purple Hearts playing with Brad Gushue’s Newfoundland/Labrador team. Gushue, the 2006 Olympic gold-medallist, is back for his 10th trip to the Brier with his team from St. John’s, while 2006 Brier champion Jean-Michel Ménard of Quebec is another experienced skip who’ll contend for a spot in the four-team playoff round with his Saint-Romuald quartet. The field is rounded out by B.C.’s Andrew Bilesky (New Westminster), Saskatchewan’s Brock Virtue (Regina), Northern Ontario’s Brad Jacobs (Sault Ste. Marie), Nova Scotia’s Paul Flemming (Lower Sackville), New Brunswick’s James Grattan (Oromocto), Prince Edward Island’s Eddie MacKenzie (Charlottetown) and the Northwest Territories/Yukon’s Jamie Koe (Yellowknife). It will be the 84th renewal of the Canadian Men’s Curling Championship, and it will be the sixth time Edmonton has played host — the most recent in 2005, when the all-time attendance record of 281,985 fans was set. Edmonton also hosted Briers in 1954, 1973, 1987 and 1999. 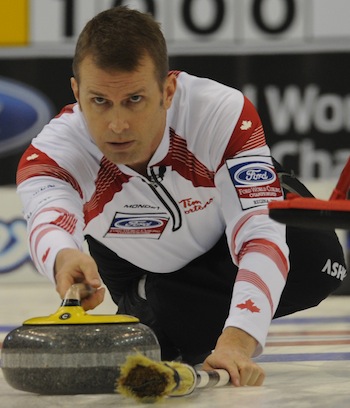 It’s the 13th time that Alberta has hosted the Brier since the event’s inception in 1927 at Toronto, and it will be the ninth year of title sponsorship by Tim Hortons. The Brier has been played in 31 cities across Canada, from Victoria to St. John’s. Manitoba has won a leading 27 Briers, while Alberta is next with 25. Teams will play a 12-team round-robin draw leading to the Page playoff round, which sees the top two teams meeting in the Page 1-2 game, with the winner advancing to the final while the loser goes to the semifinal. The third- and fourth-place teams meet in the Page 3-4 game, with the winner advancing to the semifinal on Sunday morning. The loser plays in the bronze-medal game Sunday afternoon against the semifinal loser. TSN/RDS, the official broadcast partner of the Season of Champions, will provide exclusive and comprehensive coverage of the Tim Hortons Brier, televising all morning, afternoon and evening round-robin draws, plus the playoffs. The gold-medal final is Sunday, March 10, at 6:30 p.m. local/8:30 pm ET. It’s the 11th consecutive year that the Brier final has been contested in Eastern prime time, starting in 2003 in Halifax. In addition to wearing the Maple Leaf in Victoria, the winning team will be in contention to play at the 2014 World Financial Group Continental Cup in Las Vegas (the Canadian teams will be determined following the 2013 Tim Hortons Roar of the Rings Canadian Curling Trials in Winnipeg in December) and becomes one of the teams eligible for either the Capital One Road to the Roar Pre-Trials in Kitchener, Ont., or the Trials in Winnipeg, which will determine Canada’s representatives for the 2014 Olympic Winter Games in Sochi, Russia. Martin, Howard and Stoughton have already qualified for the Trials. Teams that make the playoffs will earn a share of $130,000 in cresting television exposure value: $40,000 each to the winner and runner-up, $30,000 to the bronze-medal team and $20,000 to fourth. As well, the winning team will earn $144,000 in Sport Canada funding over a two-year period as well as $40,000 from Own The Podium for training and competition expenses and an additional $10,000 for wearing a Tim Hortons sponsorship crest at the Ford World Men’s Championship. The Ford Hot Shots skills competition will begin on Friday, with the preliminary round set for 1 p.m. MT; the top eight qualifiers will advance to Saturday’s playoff round, which begins at 11:30 a.m. MT following the Opening Ceremonies. The Hot Shots champion will win a two-year-lease on a 2013 Ford Fusion SE 2.0L, AWD with EcoBoost, an approximate retail value of $14,000. The second-place finisher will be presented with a cheque for $2,000, while the third-place finisher receives $1,000. The opening draw of the 2013 Tim Hortons Brier is set for 1:30 p.m. MT/3:30 p.m. ET on Saturday. For draw information and live scoring, go to www.curling.ca.