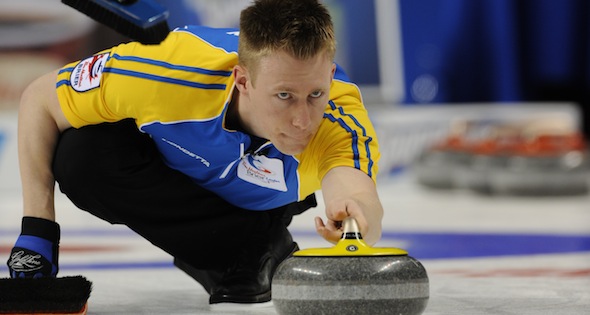 Alberta second Marc Kennedy is tied for top spot after the preliminary round of the 2013 Ford Hot Shots competition. (Photo, CCA/Michael Burns)

Also advancing was Saskatchewan skip Brock Virtue and Manitoba third Jon Mead, each with 26 points, plus Alberta’s John Morris, Sean Ledgerwood of Prince Edward Island and Brett Gallant of Newfoundland/Labrador all with 24 points “Hardest part is the draw,” Middaugh said of the shooting. “The draw is a bit of a guess because you throw it in practice it’s probably 10 feet slower. All the credit to the sweepers for making the draw, those are the ones I got big points on.” 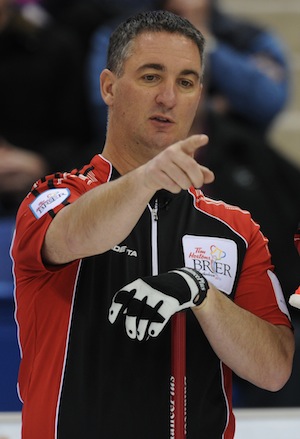 While Middaugh will looking to defend his title, Kennedy is hoping for better results that the eighth-place finish he had the only other time he made the final eight. Regarded as one of the best seconds in the game, Kennedy demonstrated his shot-making skills Friday. About time, he admitted afterwards, noting the rest of the team – skip Kevin Martin, third John Morris and lead Ben Hebert — has had more success than him. “John won it, Kevin made the final once, Ben’s made it to the final so it’s me who hasn’t had a lot of success so I take a bit of ribbing for it. It’s about time I came through.” Besides team bragging rights, the Hot Shots is a great prep for the actual Tim Hortons Brier, presented by Monsanto, that gets underway Saturday afternoon. “That’s the most important part of the whole thing,” said Kennedy. “It’s nice to get acclimatized to the building, the ice, get a feel for draw weight. Allows you to get comfortable.” The St. Albert, Alta., native lost three points on two shots. “The first shot, the nose hit, I rolled a bit too far. And the tap-back, I tapped it to the eight foot. The key to the hot shots is to stay in the hunt and make the double. Most guys who made the double are the guys who are going to move on.” 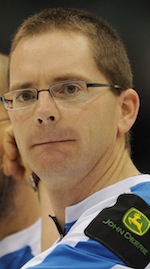 This is the 19th year of the shot-making skills competition that is held at both the Scotties Tournament of Hearts and the Brier. The quarter-finals begin Saturday at 11:30 a.m. (MST) followed by the semifinals and final. The Brier begins with its first draw at 1:30. All draws will be televised on TSN/RDS, the official broadcast partner of the Season of Champions. The annual Hot Shots competition sees curlers throw six different shots: hit and stay, draw the button, draw the port, raise, hit and roll and double takeout. Each shot is awarded points on a scale from zero to five depending on the end result of the shot. Ford of Canada provides the winner with a two-year lease on a 2013 Ford Fusion SE 2.0L. The second-place finisher wins $2,000 and the third-place finisher receives $1,000. The Ford Hot Shots event has been a fixture at the Brier since 1995. Past winners at the Brier have been Greg McAulay and Pat Ryan of British Columbia, Alberta’s Don Bartlett, Randy Ferbey and John Morris, Saskatchewan’s Steve Laycock, Manitoba’s Steve Gould (twice), Northern Ontario’s Mike Coulter, Ontario’s Ed Werenich, Craig Savill and Richard Hart, New Brunswick’s Rick Perron, Jeff Lacey and Marc LeCocq, Newfoundland and Labrador’s Mark Nichols, Ontario’s Glenn Howard and Middaugh.