EDMONTON – Brad Gushue of Newfoundland-Labrador broke open a tie game by scoring five in the sixth end and stealing three more in the seventh to open the 2013 Tim Hortons Brier, presented by Monsanto, with a 10-2 victory over Paul Flemming of Nova Scotia. In other first-draw games Saturday, Brad Jacobs of Northern Ontario scored three in the seventh and four in the ninth to beat Jamie Koe of Northwest Territories/Yukon 11-6, Jean-Michel Ménard of Quebec nipped James Grattan of New Brunswick 5-4 and Brock Virtue drew the four-foot with his final rock in the 11th end to edge Eddie MacKenzie of Prince Edward Island 4-3. 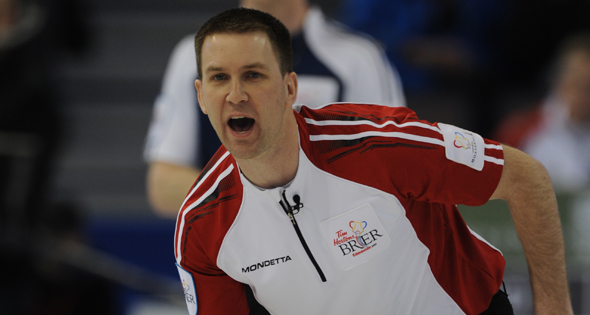 Brad Gushue of Newfoundland/Labrador got off to a great start at the 2013 Tim Hortons Brier, presented by Monsanto, on Saturday. (Photo, CCA/Michael Burns)

In the second draw at 6:30 p.m. MST (TSN-RDS), Newfoundland-Labrador plays P.E.I., Kevin Martin of Alberta meets Jeff Stoughton of Manitoba, the Territories takes on New Brunswick and defending champion Glenn Howard of Ontario plays Andrew Bilesky of British Columbia. httpvh://www.youtube.com/watch?v=9rfCRfkG3uY Gushue and his rink of third Brett Gallant, second Adam Casey and lead Geoff Walker gave up singles in the first and fourth ends but counted two in the third to be tied 2-2 after four. 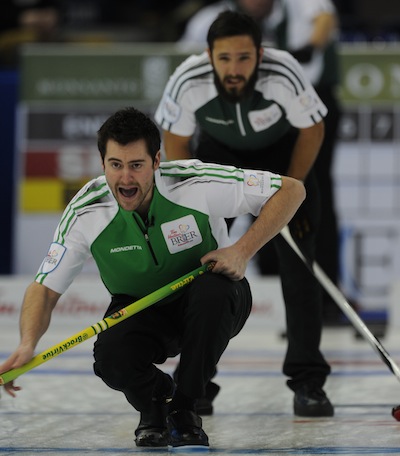 “The guys were throwing well, had a good attitude, very composed, especially Brett, his first game at the Brier,” said Gushue, who came through a port and executed a delicate rub on one of his own rocks in the four foot to move two Nova Scotia stones and leave himself sitting two. “We knew that spot because I played it in the first end,” he said of the decision to take the shot. “We really had a tough shot for two if we played anything on the out-turn and I knew that spot so I knew if I got through with kind of like hack weight we were going to get two. It was just a matter of getting through the hole. It may not have looked pretty on TV but it was what we were trying.” In the sixth, Gushue was sitting three, all inside the four foot. Nova Scotia third Ian Fitzner-LeBlanc, throwing skip rocks, tried a difficult hit and roll that failed, leaving Gushue with an open draw for five. “We could have thrown a hard out-rock peel and try to kill two and then he would had to make a nice draw for two, would have been up three at that point,” Flemming said when asked what other options he had. “Or we could go to the nose with board weight and forced him to make a nice out-turn draw for two, but Fitzee was in the mood to go for that in-off and it just tracked a little on him. It was a gamble, it didn’t pay off …taking a second look at it, it did look kind of delicious. If he hit a quarter or third with enough weight there was actually an opportunity to steal one. If he hit it right possibly could have made a triple.” Instead Gushue counted five and, not feeling any sympathy, came back with a steal of three to end the game after seven ends. Quebec scored three in the fourth end for a 3-0 lead and looked in control of their match with New Brunswick. But Grattan scored singles in the fifth and eighth ends and then stole two in the ninth to tie it 4-4. “I missed a shot that was easy in the ninth end to put ourselves in a little trouble so I was happy to have a decent shot to win the game,” said Ménard, who had an open draw to the four-foot to win. [flickr-gallery mode=”tag” tags=”2013brierd1″ tag_mode=”all”]