EDMONTON — Jeff Stoughton stole one in the 11th end Saturday to edge hometown favourite Kevin Martin of Alberta 5-4 in the second draw of the Tim Hortons Brier, presented by Monsanto. After scoring a single in the 10th to tie the game, Stoughton stole the winning point when Martin’s first shot picked up something near the hog line and he then missed a long, angle takeout attempt with his final rock. 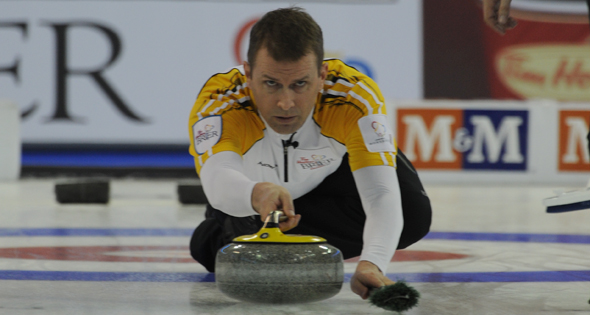 “It was one of those games where there were going to be misses on both sides,” said Stoughton. “There was a little guessing on the ice. It was the kind of game we thought it would end up to be, really close, a miss here or there and he missed his last one.” 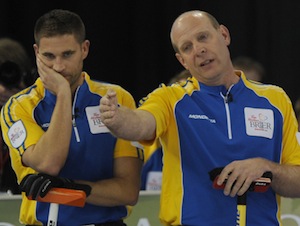 “I was a little unlucky on my first one to have a pick, but we were in trouble at that point,” admitted Martin, a four-time Brier winner. “You hate to give one away but it’s a long week.” In other second draw games, Jamie Koe of Northwest Territories/Yukon scored five in the eighth end to beat James Grattan of New Brunswick 10-7, Brad Gushue of Newfoundland-Labrador improved to 2-0 after convincing wins, including his 8-3, eight-end win over Eddie MacKenzie of Prince Edward Island, and Glenn Howard of Ontario fell behind early but rallied for an 8-4 win over Andrew Bilesky of British Columbia, Martin and Stoughton, winners of seven Briers between them, went at it like the curling heavyweights they are. Two of the pre-tournament favourites – along with Howard – traded shot for shot, and misses for misses most of the night. Manitoba scored singles in the second, fourth, sixth and 10th ends with Alberta countering with singles in the third, fifth, seventh and ninth. “It was just one win and we have to get ready for tomorrow morning,” said Stoughton. “We can’t sit back . . . but we can take a lot of positives from it.” httpvh://www.youtube.com/watch?v=6lcQ_U2j94c Howard, meanwhile, struggled early in his game and fell behind B.C. 3-0, partly due to a couple of partial misses by Howard himself that allowed B.C. to score two in the first end and steal a single in the second. But the veteran Ontario foursome – the defending Brier champions — erupted for a triple in the third and followed with steals of singles in the fourth and fifth. “They played better than us the first few ends,” said Howard, in his record 15th Brier appearance. “I kind of misread the ice a bit early, cracked a couple of guards, then one overcurled and he’s up 3-0. Give my guys credit, we didn’t get down, we got a couple of misses out of them and then we got the three right back and I think we played pretty solid after that.” Bilesky had a chance to escape the end but came up light on a freeze attempt. “If he makes that freeze I’m probably forced to one,” said Howard. “I drew open side and then he tried a double and just missed it.” Earlier, in the first draw, Gushue scored five in the sixth end and stole three more in the seventh en route to a10-2 victory over Paul Flemming of Nova Scotia. 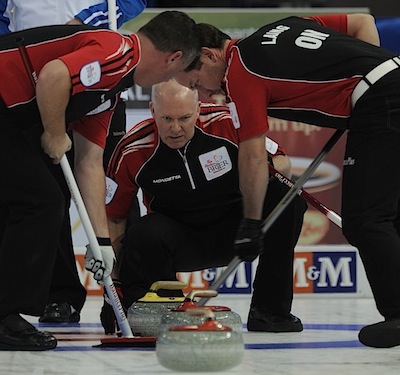 “We played good today,” Gushue said after his second win. “We played solid, put on pressure, played pretty aggressive. Those ends we kind of tried to stick to them we ended up making our shots. “Good day, very happy to be 2-0, beats last year for sure. We were 0-3 or 0-4 so two wins the first day feels pretty good.” In other first-draw results Brad Jacobs of Northern Ontario scored three in the seventh and four in the ninth to beat Koe 11-6, Jean-Michel Ménard of Quebec nipped Grattan 5-4 and Saskatchewan’s Brock Virtue drew the four foot with his final rock in the 11th end to edge MacKenzie 4-3. There are three draws Sunday, at 8:30 a.m. MST, 1:30 and 6:30 p.m. All will be broadcast on TSN-RDS. In the morning draw it will be Quebec versus Alberta, B.C. meeting Northern Ontario, Saskatchewan against Ontario and Nova Scotia playing Manitoba. For updated scores and standings go to www.curling.ca. [flickr-gallery mode=”tag” tags=”2013brierd2″ tag_mode=”all”]