EDMONTON – Quebec, Northern Ontario and Newfoundland-Labrador all scored impressive victories Saturday afternoon to improve their won-loss records to 3-0 at the Tim Hortons Brier, presented by Monsanto. Quebec’s Jean-Michel Menard, who beat four-time champion Kevin Martin of Alberta in the morning draw, took advantage of a costly last-rock miss by Jamie Koe of Northwest Territories/Yukon to score three in the fifth end en route to a 6-3 win. 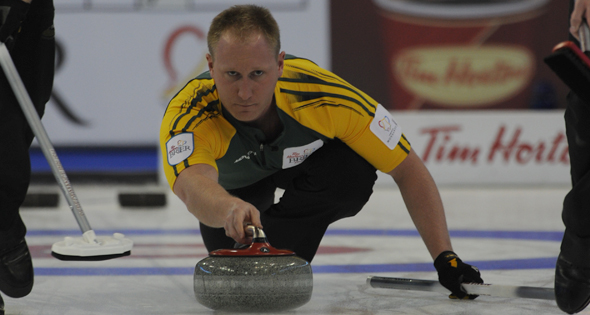 Northern Ontario’s Brad Jacobs has his team tied for the lead at the 2013 Tim Hortons Brier in Edmonton. (Photo, CCA/Michael Burns)

Brad Jacobs led Northern Ontario to its second win of the day, 10-4 over Eddie MacKenzie of Prince Edward Island and Brad Gushue’s Newfoundland-Labrador crew stole points in the fourth and fifth ends to beat Brock Virtue of Saskatchewan 7-2. In the other afternoon game, James Grattan of New Brunswick beat Paul Flemming of Nova Scotia 8-4. The results left the three teams tied for top spot with Jeff Stoughton of Manitoba and Glenn Howard of Ontario sitting at 2-0. Saskatchewan, New Brunswick and Northwest Territories/Yukon are 1-2 with Alberta, B.C., N.S. and P.E.I. winless in two games. Northern Ontario had P.E.I. on the defensive most of the game, although it wasn’t until scoring three in fifth end and stealing one in the sixth that Jacobs and his rink had control. Three more in the ninth sealed the win. “Eddie made some great shots to keep it close, a couple of draws to the button against three both times,” Jacobs said of his opposite skip’s key shots in the second and fourth ends. “Otherwise it could have been over earlier.” httpvh://www.youtube.com/watch?v=Z599-qlENXM Quebec followed up its important morning victory with another well-played game. The Quebec champs stole one in the second, scored three in the fourth and then made the key shots they had to the rest of the way. “If somebody would have told me that (we would be 3-0) before we left I would have been pretty happy and that’s what I am right now,” said Menard. “That’s three games gone and we’re more than happy to be 3-0, but it’s 11 games, we put that one in the closet and move on tomorrow.” 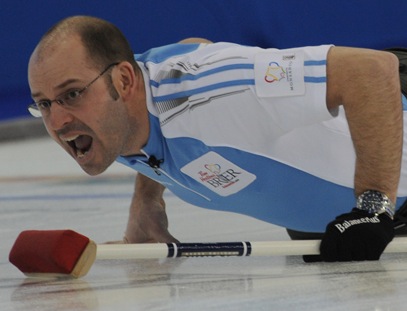 Gushue made two excellent shots in the first end – a delicate pick through a port and then a draw to the button – to steal one in the first end and build confidence for his entire team. “They were big shots,” he said afterwards. “First one took a bit of a chance and made it. Brock made a real good shot. I wasn’t too sure we could get shot. We were fortunate because we could have given up two very easily but fortunately for us he didn’t have a shot.” After giving up one in the second, Gushue’s rink scored a pair in the third, then stole a single in the fourth when Virtue’s only shot was a hit and roll out to reduce the damage to one. But Gushue, curling 95 per cent to that point, stole two more in the fifth to take control. “I like the way the guys are throwing and more particularly their composure,” he said of his foursome. “They look very comfortable and confident.” Draw 5 goes at 6:30 p.m. MST (TSN-RDS) with Ontario playing Manitoba, P.E.I. meeting Northwest Territories/Yukon, B.C. taking on Alberta and Newfoundland-Labrador playing New Brunswick. There are two draws Monday, at 1:30 and 6:30 p.m. MST (TSN-RDS). For updated scores and standings go to www.curling.ca. [flickr-gallery mode=”tag” tags=”2013brierd4″ tag_mode=”all”]