Corryn Brown and Team Canada are breathing easier today after notching their first win at the World Junior Curling Championships in Sochi, Russia. Brown and her team from Kamloops, B.C. — third Erin Pincott, Samantha Fisher, Sydney Fraser, with alternate Cathlia Ward and coach Ken Brown – remained patient against Czech Republic’s Iveta Janatova, stealing one point in the seventh, and scoring four in the ninth end to put the game away, 9-4. 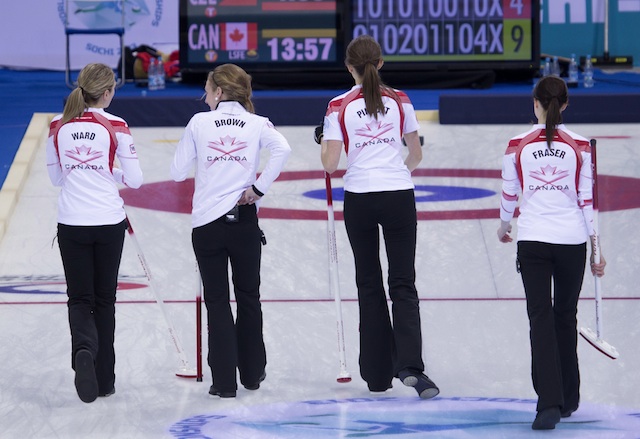 “It wasn’t the funnest start to the week, for sure,” said Brown about her team’s slow start in the round robin. “But this makes it better. It’s definitely nice to get at least one win at the Worlds under our belts. But we’ll hopefully get a couple more.” “The girls had their game back today,” said Canadian Team Leader Andrea Ronneback. “They all had good control of both draw and hit weight and that enabled them to control the game. They were patient from the start and waited for opportunities.” After seven draws, Canada sits 1-4 in the standings, tied with Switzerland’s Michelle Gribi and Sweden’s Sara McManus. Scotland’s Hannah Fleming (6-0) remains the only undefeated team on the women’s side, with Denmark’s Stephanie Risdal Nielsen and Japan’s Sayaka Yoshimura (4-1) close behind. In men’s action in the evening draw at the Ice Cube Curling Center in Sochi, Winnipeg’s Matt Dunstone and his team — third Colton Lott, second Daniel Grant, lead Brendan MacCuish, alternate Josh Barry and coach Scott Grant – had control from the start against Italy’s Amos Mosaner. Dunstone scored deuces with hammer in the first and fourth ends, then stole one in the seventh for a 5-1 lead. Mosaner answered with a deuce in the ninth. Facing two Italian counters in the 10th, Dunstone made the take-out, allowing a steal of one, but earning the 5-4 win.
“We played great again. We got in our comfort zone right away and we got into a quick lead, just like we like,” said Dunstone. “It was a real nice game for us. Going into the game they had the same record as us, so we knew we had to win this one. We know there’s a little more to go, but this was a huge game. We’ll celebrate for the five minutes we have but then we’ll move onto the next one.
“As soon as we can get into that comfort zone we like to play our style of game. But all of the teams are great here and we know that we’re not always going to get that early game lead like we’d like to.”
Team Canada men now have a 4-2 record, tied for second place in the standings with Eirik Mjoen of Norway, Evgeny Arkhipov of Russia, and Patric Mabergs of Sweden, and well within reach of the leader, Kyle Smith of Scotland (5-1). On Tuesday, Team Canada women face Switzerland’s Michelle Gribi (1-4) at 5 a.m. (EST), and both men and women will be on the ice against teams from the USA at 10 a.m. (EST): Brown will face Miranda Solem (3-3) and Dunstone will play Korey Dropkin (3-3). The women’s game can be seen on the World Curling Federation’s YouTube Channel found here: www.youtube.com/WorldCurlingTV The live coverage schedule is available along with news, live scores and galleries on the event website: https://wjcc2013.curlingevents.com For team line-ups visit: https://www.wjcc2013.curlingevents.com/teams