EDMONTON – Kevin Martin and his Alberta rink are in trouble at the Tim Hortons Brier, presented by Monsanto. A four-time Brier winner, Martin gave up three in the first and fifth ends and suffered a humbling 8-1, seven-end loss at the hands of Northern Ontario. That left Alberta at 1-3 after six draws. 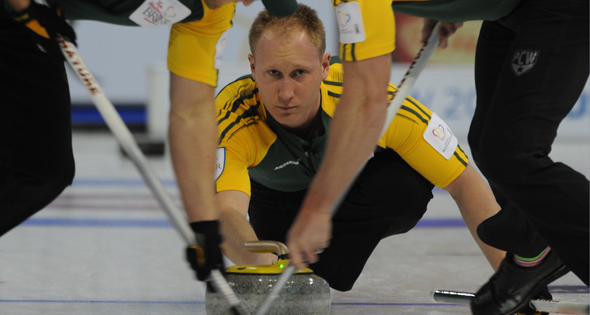 In other games Monday afternoon, defending champion Glenn Howard and his Ontario rink steamrolled Paul Flemming of Nova Scotia 10-2, Jeff Stoughton of Manitoba stole points in three straight ends en route to a 7-6 win over Jean-Michel Ménard of Quebec, and Brock Virtue of Saskatchewan edged Andrew Bilesky of British Columbia 4-2. The results left Northern Ontario, Newfoundland-Labrador and Ontario atop the standings at 4-0. Quebec and Manitoba are at 3-1, Northwest Territories-Yukon and Saskatchewan are 2-2, Alberta and New Brunswick are 1-3 with B.C., Nova Scotia and P.E.I. at 0-4. Northern Ontario got the start it wanted in the first end when Martin slid wide trying to get to shot with his last rock and Brad Jacobs calmly drew the edge of the button for three. Martin had a chance to tie it in the second. He had a relatively straight-forward tap-back draw to score three but his rock died, leaving Jacobs with a steal of one in front of a stunned Rexall Place crowd. “That steal after the three was huge,” said Jacobs. “He made a great one on his first (rock), a runback double and he had a shot for three. That’s why I like the draw there (off to the side), force him into a real tough draw and if he misses we steal and we’re up 4-0.” Alberta third John Morris slapped his broom on the ice in frustration as he watched the Martin stone die and the Alberta foursome visibly sagged. “We were dead, the game’s over,” Martin said. 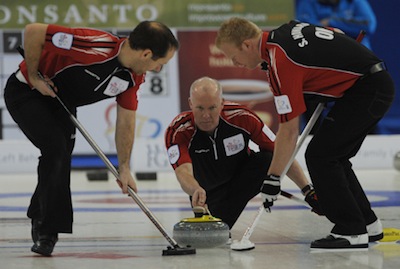 “Demoralizing,” was how Morris described the feeling. “It’s tough to think of something more painful than being the hometown team and not being able to put up a fight. That was a frustrating one. To come out like that and just get stomped … it’s not a good feeling being on the bottom.” Alberta finally got a single in the third when Martin drew the four foot, facing three Northern Ontario counters, but Jacobs came right back with a perfectly angled double kill with his final rock to score three in the fifth for a 7-1 margin. “Once you’re down three we had to gamble and then you just get further behind,” said Martin, adding the three losses hurt but it doesn’t mean they’re out of the playoff hunt. “Three is safe but we have three already so now we have to get on a roll.” Alberta will play New Brunswick and Nova Scotia on Tuesday and the Northwest Territories/Yukon on Wednesday. While Alberta continued to struggle Howard and his Coldwater, Ont., crew rolled on to its fourth straight win. Ontario scored two in the first end and then stole three in the third, two in the fourth and one in the fifth. The teams traded deuces in the sixth and seventh ends before shaking hands. “Bottom line is we didn’t miss much,” Howard said after the easy win. “I really like the way the team is playing right now. I like the fact we’re cruising along and playing really well. I have a really good feel about how we’re playing. We’re getting this little mojo going … you want to ride that and see how we can go.” While his rink is enjoying its ride so far, Howard said he’s surprised to see Alberta struggling. “Everybody is … for them to 1-3 regardless of who they’re playing is shocking. But, you play average you’re going to get beat … Alberta is a great example. They’re going to get it going, they’re too good not to.” In the evening’s 6:30 draw (TSN-RDS) P.E.I. plays Quebec, Saskatchewan meets New Brunswick, Newfoundland-Labrador takes on Northern Ontario and Northwest Territories-Yukon tangles with Nova Scotia. For updated scores and standings go to www.curling.ca [flickr-gallery mode=”tag” tags=”2013brierd6″ tag_mode=”all”]