EDMONTON – Brad Gushue survived a 10th-end scare and then made his last-rock takeout in an extra end to edge Brad Jacobs of Northern Ontario 9-8 and give Newfoundland-Labrador sole possession of first place after seven draws of the Tim Hortons Brier, presented by Monsanto. The two went into the game with 4-0 records and it was obvious neither team was going to surrender, even after Gushue opened with three in the first end. Jacobs, who along with lead Ryan Harnden shot 100 per cent in their victory over Alberta earlier in the day, made numerous clutch shots to keep his team alive. He made a little tap-back in the 10th to score two and tie the game 8-8. 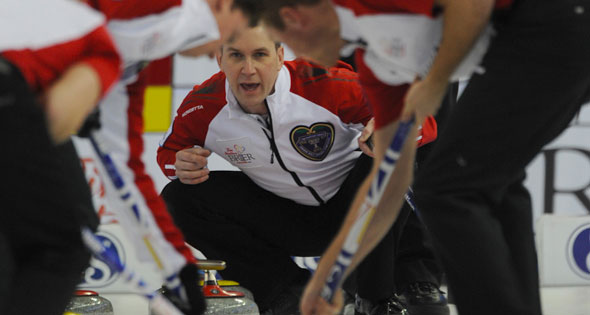 Brad Gushue urges on his sweepers en route to a victory over Northern Ontario to remain unbeaten at the Tim Hortons Brier. (Photo, CCA/Michael Burns)

“It was scary,” said Gushue after improving to 5-0. “If they make a good one on Ryan’s (Fry) last (rock in 10) they might have a chance for three. Fortunately it slid a little bit deep and we knew worst case it was going to be two. “It was a nervy game where I knew we didn’t have our best. To win that is nice.” In other seventh draw games, Jean-Michel Ménard of Quebec beat Eddie MacKenzie of Prince Edward Island 8-5, Jamie Koe of Northwest Territories/Yukon subdued Paul Flemming of Nova Scotia 9-6 and Brock Virtue of Saskatchewan rallied from a 5-0 third-end deficit only to lose 9-8 in an extra end to James Grattan of New Brunswick The result left Gushue alone atop the standings at 5-0 followed by defending champion Glenn Howard of Ontario at 4-0 and Northern Ontario and Quebec at 4-1. Manitoba sits at 3-1, Northwest Territories/Yukon at 3-2 followed by New Brunswick and Saskatchewan at 2-3, Alberta at 1-3, British Columbia at 0-4 and Nova Scotia and P.E.I. at 0-5. Gushue said his team played a solid first five ends but Northern Ontario took the momentum in the second half. “We were just clawing tooth and nail to stay in it (the last six ends). The guys on Brad’s team picked it up in the second half. Fortunately we had last rock and fortunately it curled that last little inch.” Quebec jumped on P.E.I. early with three in the first end but the winless Maritimers refused to go away. With lead Sean Ledgerwood and second Alex MacFadyen setting the table, P.E.I. scored another deuce in the fifth to trail just 5-4 at the break. 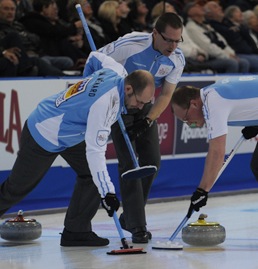 But while the P.E.I. front end held its own against Quebec, third Anson Carmody and MacKenzie didn’t match the continual high-percentage shooting of Ménard and his third, Martin Crete. “I had a good read on the ice, which helps a lot,” said Ménard. “And it was running pretty straight on takeouts and that helps because we were up most of the game so we had a hitting game on.” The hot shooting finally paid off in the seventh end when Ménard made a delicate draw into a crowded house to count three and give himself some breathing room. “The first half of the game they made some nice shots when they had the hammer, pushing shots around, keeping pace with us,” said Ménard. “Eventually we were fortunate Eddie came a little short on his draw in the seventh end and I was able to park a third one over there.” Koe stole a single in the second and then took control of his game with deuces in the fourth and sixth ends and a huge steal of three in the seventh. “We had a pretty solid game,” said Koe. “A couple of mistakes but we were able to manage it. Nova Scotia was a bit off their game and we got a couple of breaks and were able to capitalize on that. “They battled back and we were fortunate to give them a real tough shot in seven and were able to steal three. We put a lot of pressure on them that end and got a break with the miss.” Earlier in the day Kevin Martin and his Alberta crew were humbled by Northern Ontario 8-1 in seven ends. Martin shot just 68 per cent in the game and his team was a combined 79 per cent compared to a team 96 per cent for Northern Ontario. A four-time Brier winner, Martin gave up three in the first and fifth ends and the loss left Alberta demoralized at 1-3. In the other Draw 6 games, Ontario steamrolled Nova Scotia 10-2, Jeff Stoughton of Manitoba stole points in three straight ends en route to a 7-6 win over Quebec and Saskatchewan edged Andrew Bilesky of British Columbia 4-2. There are two draws Tuesday, at 1:30 and 6:30 p.m. MST (TSN-RDS). At 1:30 Alberta meets New Brunswick, Manitoba plays P.E.I., Ontario tangles with Northwest Territories/Yukon and B.C. goes against Newfoundland-Labrador. For updated scores and standings go to www.curling.ca.