EDMONTON – Glenn Howard of Ontario scored three in the first end and cruised to an 8-2 win over Brad Jacobs of Northern Ontario that moved him into a tie for top spot at the Tim Hortons Brier, presented by Monsanto. Jacobs tried to draw the button with his last rock but left it exposed and the veteran Howard, the defending Brier champion, had an easy tapback for three. 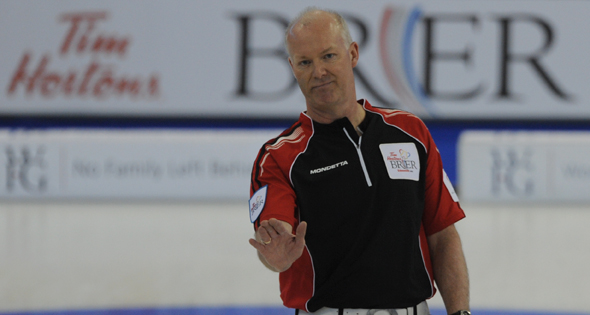 Ontario skip Glenn Howard slowed down his provincial counterpart with a win at the Tim Hortons Brier on Tuesday. (Photo, CCA/Michael Burns)

“My rock was coming down, looked fine and then kind of went completely sideways and stopped,” said a disappointed Jacobs. “Left him that hack-weight shot for three and he made it. We couldn’t get anything going after that.” In the other games in Tuesday evening’s ninth draw, Jean-Michel Ménard of Quebec beat Andrew Bilesky of British Columbia 9-3, Kevin Martin of Alberta whipped Paul Flemming of Nova Scotia 9-3 and Jeff Stoughton of Manitoba nipped Brock Virtue of Saskatchewan 7-6. The results left Ontario tied with Brad Gushue of Newfoundland-Labrador at 6-0. Manitoba and Quebec are at 5-1, followed by Northern Ontario at 4-2 Northwest Territories/Yukon and New Brunswick at 3-3, Saskatchewan and Alberta 2-4, B.C., Nova Scotia and P.E.I. 0-6. After jumping into the early lead Howard traded singles with his provincial counterpart in the second and third but then put the game away with consecutive steals in the fourth (one), fifth (two) and sixth (one) ends. httpvh://www.youtube.com/watch?v=MyDApRZRH_Q “We played a terrific first end,” he said. “Wayne (Middaugh) made two unreal shots right out of the gate. Set it up nicely and then Brad’s last one kind of over curled on him and I was able to get the tap for three. “Six and oh, it doesn’t get any better than that. I’m ecstatic the fact we’ve gone 6-0 and even better is my guys are making everything.” Jacobs had a chance for two in the fourth but jammed his shot, letting Howard steal one. In the fifth Northern Ontario second E.J. Harnden burned a shot by third Ryan Fry that ultimately let Ontario steal two more. Jacobs said his team was confident until the burned rock and the steal but said it was the right move by Harnden to call himself on the play. “You have games like that,” Jacobs said of the overall game. “We haven’t had one in a long time. And they don’t give you very many chances.” 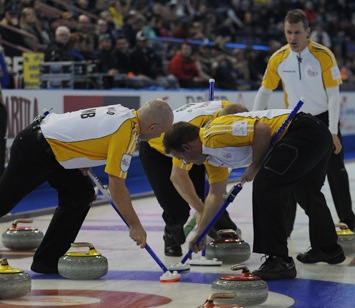 It was a total team effort in Manitoba’s victory over Saskatchewan on Tuesday. (Photo, CCA/Michael Burns)

Unlike the other three winning skips, Stoughton had his hands full with Saskatchewan. The teams traded deuces in the first two ends, singles in the third through six ends, blanked the seventh and traded deuces in the eighth and ninth. “As long as we have a shot to win the game in the 10th we’d be happy with any game,” Stoughton said after a routine hit and stick for the winning point in the 10th. “We just missed that double in nine and a perfect 10th from the guys again. Makes my job easy when I have an open hit.” Quebec continued its sharpshooting, scoring a deuce in the first end and another two in the fifth and three in the eighth to subdue winless B.C. “We’re pretty happy,” said Ménard. “We were 24 hours off and a little worried we would be flat early on but we came out firing right out of the gate. Overall we played pretty good other than a mistake I made in the sixth end that could have given them three points. Other than that I thought we were solid from start to finish.” The struggling Alberta foursome finally had something to smile about with its convincing victory over winless Nova Scotia. After giving up a single in the first end, Flemming was heavy with his last rock draw attempt in the second, giving up a steal of two to Alberta. Nova Scotia recovered with a pair in the third but a superb double by Martin gave Alberta three in the fourth and his team then stole two in the fifth and another in the sixth. 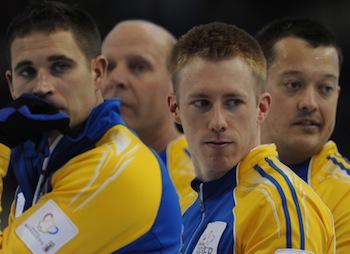 Team Alberta got back on track with a win on Tuesday night. (Photo, CCA/Michael Burns)

“You just want to win for the crowd,” said Martin, who earlier had conceded his team’s playoff hopes were virtually non-existent. “I promise we will try our best the rest of the games. Wherever it ends up now doesn’t really matter because around here second to 12th is the same. You don’t get to go to Victoria.” In Tuesday afternoon’s eighth draw, New Brunswick’s James Grattan used his final rock to score one in the 10th end to beat Alberta 6-5, Ontario beat Northwest Territories/Yukon 7-4, Newfoundland-Labrador beat B.C. 6-3 and Manitoba whipped P.E.I. 9-2. Wednesday’s draws go at 1:30 and 7:30 p.m. MST (TSN-RDS). The afternoon draw has Saskatchewan playing Nova Scotia, Northwest Territories/Yukon meeting Newfoundland-Labrador, New Brunswick playing P.E.I. and Northern Ontario taking on Quebec. For updated scores and standings go to www.curling.ca.   [flickr-gallery mode=”tag” tags=”2013brierd9″ tag_mode=”all”]