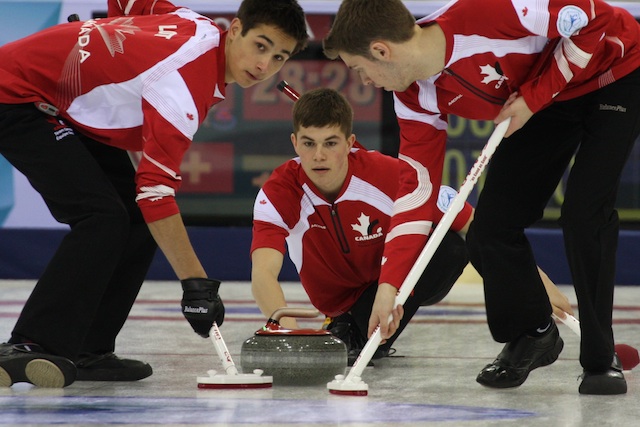 “Win (one ore game) and we’re in, I think it is now,” said Dunstone after the game. “We just have to do our job there and the rest can sort itself out.” In the first five ends of a high-scoring game, Canada took control. Zoning in on the low hitting percentages of the Norwegian team, the Canadians put rocks in the house and capitalized on mistakes in the early ends to take deuces and limit the scoring. In the fifth end, Dunstone made a delicate tap on his own stone in the four foot, picking up three points and taking a 7-3 lead into the break. Mjoen was able to score a single in the seventh end, then turned on the offence in the eighth, forcing Dunstone to miss a difficult take-out and stealing two. But Canada came back with a deuce of their own to lead 9-6 after nine and run the Norwegians out of rocks in the 10th.
“It was a sloppy end, we know that we can do better than that, but we still had control of the game,” said Dunstone of the eighth. “That was the positive that we took out of that. We just made sure to score or blank the ninth end and then obviously we got the two.
“Compared to the last couple of games it was the weaker one in the last three. But we’ll bounce back tomorrow. We still won the game and that’s the main thing, it doesn’t matter what the percentages are, but the guys are curling great still. We just have to keep it up for tomorrow.”
Team Canada has only one game left in the round robin – against China’s Zhongbao Zhang (1-7) on Thursday (4 a.m. EST). The Canadian women had the day off on Wednesday, but Corryn Brown and her team from Kamloops, B.C. – third Erin Pincott, Samantha Fisher, Sydney Fraser, with alternate Cathlia Ward and coach Ken Brown – will finish off the round robin on Thursday with games against Sweden’s Sara McManus (3-4) and Norway’s Kristine Davanger (1-7). Brown finishes out of playoff contention on her first trip to the world championships. “It’ll be a tough road back here, for sure,” she said after her Tuesday win over the Miranda Solem of the U.S. yesterday. “But we definitely took advantage of the experience we had here.” Fans can access video highlights and live coverage of games from the round robin on the World Curling Federation’s YouTube Channel found here: www.youtube.com/WorldCurlingTV The live coverage schedule is available along with news, live scores and galleries on the event website: https://wjcc2013.curlingevents.com For team line-ups visit: https://www.wjcc2013.curlingevents.com/teams