EDMONTON – A confident Brad Gushue and his Newfoundland-Labrador foursome cruised to their seventh straight victory at the Tim Hortons Brier Wednesday afternoon, a 7-3 win over Jamie Koe of Northwest Territories-Yukon. Gushue scored two in the first end and then just kept the game under control the rest of the way, never really giving Koe a chance to crack a big end. 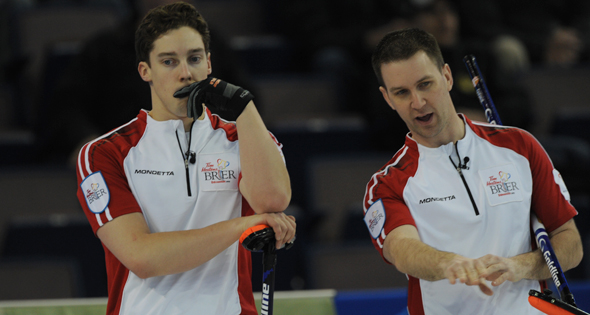 “We just seemed in control,” agreed Gushue who is in his 10th Brier and has never won it. “We didn’t want to push it too much or get too aggressive because we felt we were going to be able to force them and get the odd deuce. With the exception of a couple of mistakes we threw the rocks pretty well.” Brad Jacobs of Northern Ontario made a clutch last-rock draw to the four-foot to nip Jean-Michel Ménard of Quebec 6-4, a decision that left both teams with 5-1 records. In other ninth-draw games Brock Virtue of Saskatchewan beat Paul Flemming of Nova Scotia 7-2 and James Grattan of New Brunswick got past Eddie MacKenzie of Prince Edward Island 8-6. The results left Gushue on top of the standings at 7-0 with Glenn Howard of Ontario the only other unbeaten skip at 6-0. Manitoba is third at 5-1 followed by Quebec and Northern Ontario at 5-2, New Brunswick at 4-3, Northwest Territories/Yukon and Saskatchewan at 3-4, Alberta at 2-4, British Columbia at 0-6 and P.E.I. and Nova Scotia at 0-7. Gushue puts his perfect record on the line tonight against Jeff Stoughton of Manitoba and then meets defending champion Howard on Thursday, two tough matches that could go a long ways to determining the top spots in the round robin. “We have Jeff tonight and Glenn tomorrow but if we continue to play this way we’re going to win as many against them as they’re going to win against us,” said Gushue. “The key is just play well, make the key shots, maybe catch a break, get a big win. The last two games were textbook so we feel very comfortable, very confident.” 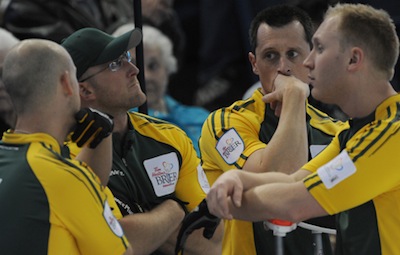 The Quebec-Northern Ontario match came down to last rock and Jacobs made the draw to give him the win. “I feel like I’ve had draw weight all week, even though I blasted one into the hack in the second end. That was just a mental breakdown, lost all focus,” said Jacobs. “So going into the last shot I was pretty confident we were going to make it. Just can’t overthrow it. We have two strong sweepers so just lobbed it down there. Defensive shotmaking and narrow misses by both skips left the teams tied 1-1 after five ends. Ménard stole two in the fifth when Jacobs came up wide and heavy on his attempted draw to the button against three Quebec counters. But Jacobs made up for it in the seventh. After Ménard failed to take out a couple of Northern Ontario stones in the back 12-foot, Jacobs made a superb angled double kill of both Quebec rocks inside the four-foot to count three for a 4-3 lead. “After that draw slid a little too far and we gave up a steal of two we weren’t feeling very good,” said Jacobs. “I’m proud of my team for hanging in there. The three back in seven was a huge turning point for our team, for our attitude, our mentality, everything.” Ménard felt his team controlled the first part of the game and was playing confident until the seventh end. “They played a perfect seventh end to set up three points,” he said. “Then I made a little error in the ninth, didn’t give myself enough ice. I’m a little disappointed but we’re 5-2 so we have to look at the big picture.” Saskatchewan scored three in the second end and stole one in the third to take command against a Nova Scotia team that struggled with its shots once again. “A nice set up that end, the boys made all their shots and I just had a little runback for three,” Virtue said of the second end that helped alive his team’s fading playoff hopes. “Coming into this game we really had no option but to win the rest of our games. We accomplished the first of, I guess has to be five in a row now. We’re going to be a little more confident now and having a couple of tough games tomorrow (against Northern Ontario and Alberta) we’ll need that confidence.” In the evening’s 11th draw Northwest Territories/Yukon plays Alberta, Ontario takes on New Brunswick, Manitoba meets Newfoundland-Labrador and P.E.I. plays B.C. For updated scores and standings go to www.curling.ca. [flickr-gallery mode=”tag” tags=”2013brierd10″ tag_mode=”all”]