EDMONTON – Glenn Howard cracked a pair of three-enders and rolled to another impressive victory in his pursuit of a second straight Tim Hortons Brier championship, presented by Monsanto. The Coldwater, Ont., foursome scored an easy 7-3 win over James Grattan of New Brunswick to become the only unbeaten team at 7-0. Brad Gushue of Newfoundland-Labrador went into the 11th draw at 7-0 but lost to Jeff Stoughton of Manitoba 9-5. 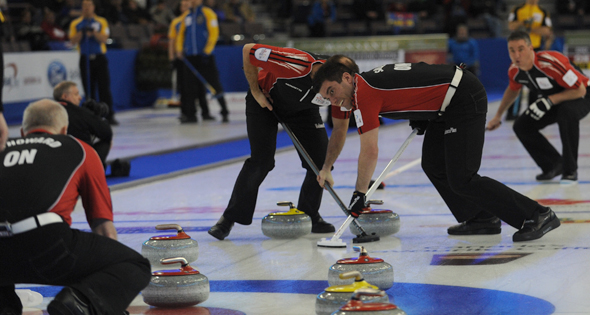 “That’s the best thing, that second number stays at zero, that’s a great feeling,” Howard said after his 17th consecutive Brier win dating back to last year. “Again I can’t say enough about my guys, they didn’t miss anything tonight.” New Brunswick scored first, a single in the second end, but Ontario responded with three in the third and another three in the fifth pretty much ensured their victory. “I like that we’ve been solid all the way through,” Howard said of his foursome. “We haven’t been in trouble too many ends and when we have we’ve been able to get out of them. It’s been a nice little wave, that’s what I like, the fact that we’re so consistent. The key is we have to keep doing it.” Gushue struggled in the early goings against Manitoba, falling behind 4-1 after three ends. But he put together a pair of two-enders in the fifth and seventh to pull even at 5-5. His perfect winning record ended when he gave up four to Stoughton in the seventh. Manitoba was counting six and Gushue last’s rock – he slipped on his delivery – cut that to one but Stoughton picked out Gushue’s stone to count four. 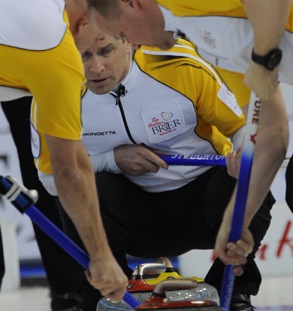 “We thought he might have been able to get rid of three,” Stoughton said of Gushue’s desperation last stone. “We got fortunate (Newfoundland-Labrador third Brent Gallant) missed his rock and then (Manitoba third John Mead) made two beauties. They missed a bad one and we took advantage of it, put in three really good shots and got the big end.” Gushue’s team had a chance to avoid the big end but Gallant’s last rock was wide, hit their own shot rock on the wrong side and ended up leaving Manitoba sitting three. “We were looking for miracles from then,” admitted Gushue. “If we hit it on the other side we would be in good shape. Pretty disappointing to not even have any remote shot to get out of it. We knew we were up the creek without a paddle. In the other 11th-draw games Kevin Martin of Alberta showed flashes of the game that earned him four Brier championships as a skip to beat Jamie Koe of Northwest Territories/Yukon 8-3 in seven ends and Eddie MacKenzie of Prince Edward Island scored three in the second end and hung on to beat Andrew Bilesky of British Columbia 10-7. “We played well,” Martin said of the game that kept alive his faint playoff hopes. “Come out tomorrow, win two then we can talk about seeing what our chances are.” The difference in their game Wednesday, he said, was rock placement from the first two ends, when he gave up singles to Koe through the final five ends. Alberta counted four in the third end. “First end I goofed, went too deep with my first draw,” he admitted. “The rest of the game we had them in trouble.” There are three draws Thursday, at 8:30 a.m., 1:30 and 7:30 p.m. MST (TSN-RDS). The morning draw has only two games: Northern Ontario versus Saskatchewan and Nova Scotia against Quebec. For updated scores and standings go to www.curling.ca. [flickr-gallery mode=”tag” tags=”2013brierd11″ tag_mode=”all”]