Matt Dunstone’s Canadian men’s team is through to the Page 1 vs 2 playoff game at the 2013 World Junior Curling Championships in Sochi, Russia. 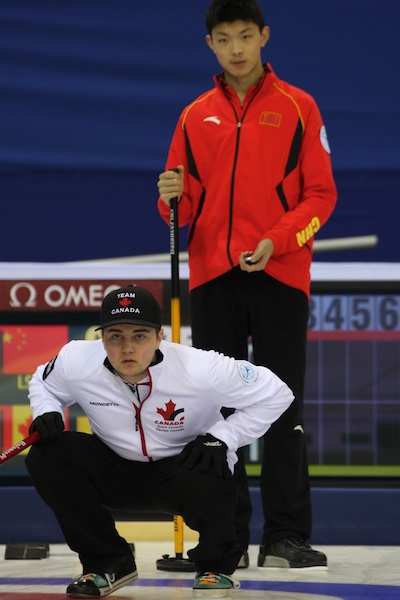 Matt Dunstone and his Winnipeg team – third Colton Lott, second Daniel Grant, lead Brendan MacCuish, alternate Josh Barry and coach Scott Grant – assured themselves of a playoff spot with an 8-3 win over China’s Zhongbao Zhang on Thursday. The win propels them to a 7-2 finish in the standings, behind Scotland’s Kyle Smith (8-1). Russia finishes in third place despite having the same record as Canada by virtue of a loss to Dunstone in round-robin play. “We just started to play a little more of our game,” said Dunstone about the relatively easy win over China. “We knew once we got a lead on them, they’d call some shots that weren’t totally correct and we’d have our chances on them. Earlier on they were making everything so we had to bear down and have patience in that one.”
Canada will face Scotland in Friday evening’s Page 1-2 playoff (10 a.m. EST), with the winner going directly to Sunday’s gold-medal final, and the loser having a second chance by way of Saturday’s semifinal. Russia will face Sweden in the Page 3-4 game, with the winner moving on to the semifinal. The loser of that game will come back onto the ice to play against the semifinal loser for bronze on Sunday.
“The win against Russia was huge. Earlier in the week you might not think that and think it’s just another game but looking at it now, it’s a huge win for us,” Dunstone said about making it to the 1 vs 2 game. “I think we have a full day to re-group, so I think we’ll go for pizza tonight. Our next game is just another game, so we’ll take it from there.” While the men are heading on to the playoffs, Corryn Brown and her team from Kamloops, B.C. – third Erin Pincott, Samantha Fisher, Sydney Fraser, with alternate Cathlia Ward and coach Ken Brown – will be cheering from the sidelines after finishing out of playoff contention. The Canadian women lost 7-6 to Sweden’s Sara McManus on Thursday morning, then followed up with an 8-6 win over Norway’s Kristine Davanger, finishing the round robin with a 3-6 record. Scotland’s Hannah Fleming (8-1) will meet Japan’s Sayaka Yoshimura (6-3) in the Page 1 vs 2 playoff, while Czech Republic, Russia, Sweden and Denmark – who all finished with 5-4 records – will fight it out in tiebreakers to determine who will play in the Page 3 vs 4 playoff. Fans can access video highlights and live coverage of games on the World Curling Federation’s YouTube Channel found here: www.youtube.com/WorldCurlingTV The live coverage schedule is available along with news, live scores and galleries on the event website: https://wjcc2013.curlingevents.com For team line-ups visit: https://www.wjcc2013.curlingevents.com/teams 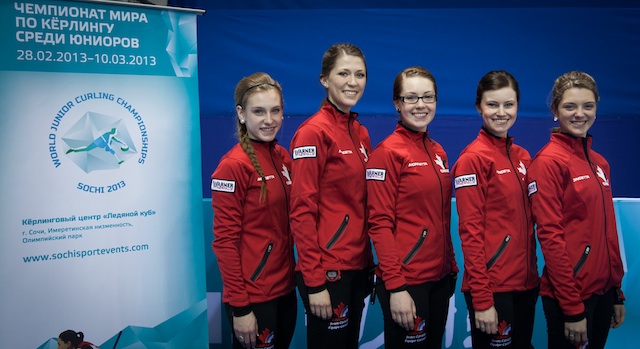