EDMONTON – Brad Jacobs’ last-rock draw attempt slid wide and long allowing Saskatchewan to steal a point in the extra end for a critical 7-6 win that kept alive Brock Virtue’s hopes of making the playoffs at the Tim Hortons Brier, presented by Monsanto. The result dropped Northern Ontario’s record to 5-3 and improved Saskatchewan’s to 4-4. 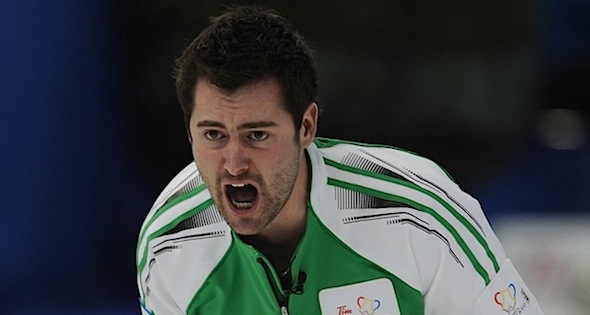 “We’re still alive,” said a greatly relieved Virtue. “It brings them down to three losses and anything can happen now. Our game means something tonight.” Saskatchewan jumped into a 4-0 lead with doubles in the first and third ends and only a measurement that showed third rocks identical kept them from scoring three in the third. That created the opportunity for Ontario to pull into a tie with their deuce in the fourth and a steal of one in the fifth. “I’ve never seen that before,” Virtue said of the measurement. “That would have been a very large point to have that third one. It would have made things a lot less stressful maybe.” Northern Ontario stole a single in the ninth when Virtue’s last-rock double attempt was narrow, giving Jacobs a 6-5 lead. “In that situation, coming home down one with the hammer is not the end of the world,” Virtue said of the decision to try the double rather than a wide draw. “Might as well go for two, it was there.” Saskatchewan tied it in the 10th and got the win in the 11th. Jacobs said his team didn’t curl well right from the beginning, he missed a call on a double peel in the third and they just couldn’t make any runbacks, resulting in Saskatchewan being able to load the house with rocks throughout the game. Still, he said, “we had a shot to win but it was a tough draw and it just kind of hung out there … didn’t come over. Next game we have Jeff Stoughton, real tough game. So we’ll take the afternoon off, relax and hopefully play a little bit better.” In the only other morning game, Jean-Michel Ménard of Quebec scored two in the first end and rolled to an 8-5 victory over winless Paul Flemming of Nova Scotia 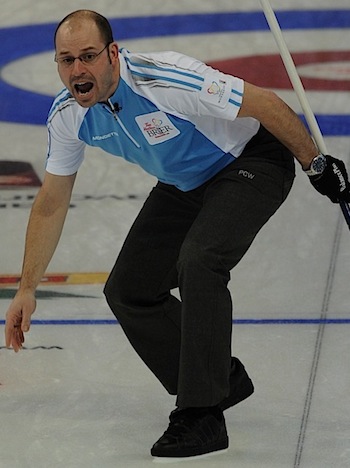 “After a tough loss last night (to Jacobs) we needed to rebound with a good performance which I think we absolutely did this morning,” said Ménard. “Now we have the afternoon off to relax and then a big game tonight against Mr. Howard, that will be fun. “We figure we need at least 7-4 for maybe a tiebreaker, 8-3 would at least guarantee us playing a tiebreak game or maybe right into the playoff. But we know now 7-4 in the minimum if we want to get into any tiebreakers.” After 12 draws Ontario leads the way at 7-0 followed by Newfoundland-Labrador 7-1, Manitoba 6-1, Quebec at 6-2, Northern Ontario at 5-3, Saskatchewan and New Brunswick at 4-4, Alberta at 3-4, Northwest Territories/Yukon at 3-5, Prince Edward Island at1-7, British Columbia 0-7 and Nova Scotia 0-8. The key matchup in the 1:30 p.m. MST draw will see unbeaten Glenn Howard of Ontario take on Brad Gushue of Newfoundland-Labrador. The other games have P.E.I. playing Alberta, Northwest Territories/Yukon meeting B.C. and New Brunswick taking on Manitoba. For updated scores and standings go to www.curling.ca.