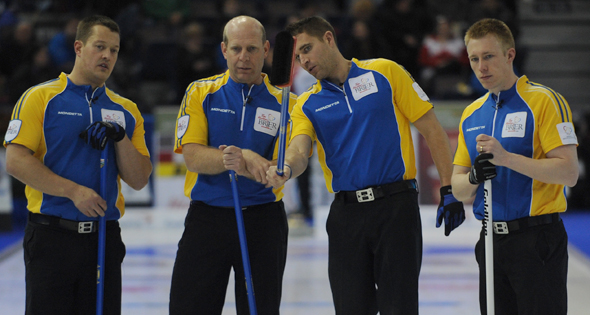 The win improved Alberta to 6-4 and its final game is Friday evening against unbeaten defending champion Glenn Howard of Ontario, who rolled past Eddie MacKenzie of Prince Edward Island 6-1. In other games James Grattan of New Brunswick beat Andrew Bilesky of British Columbia 8-4 and Jamie Koe of Northwest Territories/Yukon stunned Jeff Stoughton of Manitoba by scoring three in the final end for a 7-5 win. The results left Ontario at 10-0, Newfoundland-Labrador and Manitoba at 7-3, Northern Ontario and Quebec at 6-3, Alberta 6-4, New Brunswick 5-5, Saskatchewan 4-5, Northwest Territories/Yukon 4-6, Nova Scotia 1-8 and P.E.I. and B.C. 1-9. For Martin, who’s seeking his record fifth Brier title as a skip, and team of third John Morris, second Marc Kennedy and lead Ben Hebert to get to the playoffs, he needs to beat Howard and then hope the cards fall his way in other games involving the four teams just above him. Gushue had a 5-4 lead going into the 10th but Martin had the hammer. Gushue made a terrific raise takeout with his first shot but after Martin deliberately took out his own rock sitting in the eight-foot, Gushue left his attempted freeze exposed. Martin clipped out the rock to count two for the win. “Brad made an absolute beauty on his first one,” Martin said. “Dislodged the freeze and he rolled ours into a double situation so there was nothing we could do but peel ours out and give him the freeze. “But he was right in a valley, I don’t know if that freeze was there simply because if he takes a little more ice, which he did, it runs dead straight and stops in the middle of the four-foot on the other side of centre. If he takes a little less it curls and ends up on top of the two rocks in the four-foot.” Gushue, who suddenly finds himself back in the playoff mix, said his team of third Brett Gallant, second Adam Casey and lead Geoff Walker, hasn’t been finishing off their recent games. While he wondered why his last rock in the 10th didn’t curl – “unfortunate because the weight was perfect” – he was more upset with his last shot in the sixth. He had a chance for three and a 6-2 lead if he could punch out one Alberta rock between two of his stones in the four-foot. “They were so close together you were going to hit them almost at the same time,” he explained. “I had to hit the one on the right first and just hit the one on the left first and kind of jammed it. “That’s the one I’ve going to kick myself over the next half hour or hour. After that shot we were still up by two, still in control. We just played poorly the last end.” 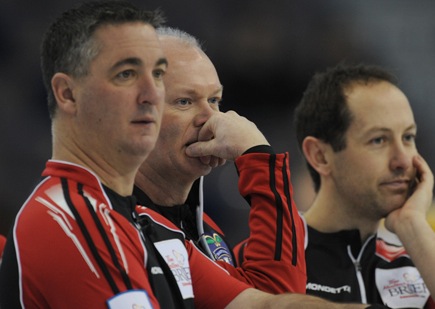 Howard, meanwhile, had a relatively easy morning, jumping to a 3-1 lead after three ends. “I made a kind of good slash in the third end to go up 3-1 and for some reason Eddie didn’t want to get into it,” Howard said after his 10th straight victory that guaranteed him hammer and choice of stones in the one-two page playoff game. “We threw it in the rings, he hits it, we go in the rings, he kept doing it. He finally got aggressive in eight, probably should have made his last shot, was heavy, the ball game.” Howard said his team of third Wayne Middaugh, second Brent Laing and lead Craig Savill go into Saturday’s Page playoff one-two full of confidence, no matter what happens in their final game Friday evening against Alberta. “I have to admit this is probably one of the best Briers I’ve ever seen the four of us play,” said Howard. “It’s been surreal to be honest. All four guys are firing on all eight cylinders, the confidence is there, we’re not making any back-to-back misses, hardly any misses at all. I hope we can maintain that and go right through the playoffs with the same quality of play.” The team went into the draw shooting 90 per cent – tops in the event – and on Friday Howard and Middaugh were 92 per cent, Laing and Savill 98 per cent. In the 1:30 p.m. MST (TSN-RDS) draw Gushue plays Jean-Michel Ménard of Quebec, Brad Jacobs of Northern Ontario meets New Brunswick, Brock Virtue of Saskatchewan plays Koe and Nova Scotia takes on P.E.I. For updated scores and standings go to www.curling.ca. [flickr-gallery mode=”tag” tags=”2013brierd15″ tag_mode=”all”]