EDMONTON – Glenn Howard of Ontario remained unbeaten and locked up first place Thursday while Kevin Martin of Alberta kept alive his slim playoff hopes at the Tim Hortons Brier, presented by Monsanto. Jean-Michel Ménard of Quebec narrowly missed on a last-rock raise in-off attempt to remove an Ontario counter in the four-foot, giving Howard a 4-2 victory. 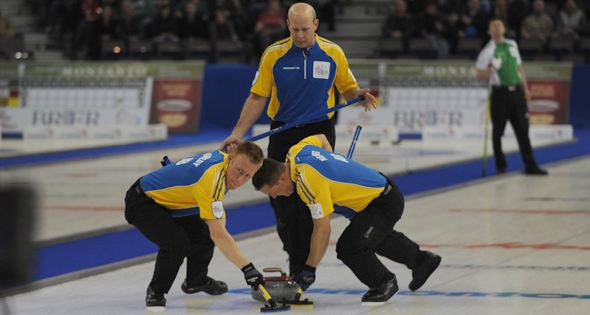 Martin also had his hands full with Brock Virtue of Saskatchewan but managed a 6-5 win, his fourth straight. In other games, Brad Jacobs of Northern Ontario scored four in the eighth end for a 9-4 win over Jeff Stoughton of Manitoba and Paul Flemming of Nova Scotia got his first win, 9-6 over Andrew Bilesky of British Columbia. httpvh://www.youtube.com/watch?v=Aj9erOgyUsQ The results left Ontario at 9-0, Manitoba and Newfoundland-Labrador 7-2, Quebec and Northern Ontario 6-3, Alberta 5-4, Saskatchewan and New Brunswick 4-5, Northwest Territories/Yukon 3-6, and British Columbia, Nova Scotia and Prince Edward Island all 1-8. Ontario’s victory secured a berth in Saturday’s Page playoff one-two game, with a berth in Sunday’s championship final on the line. The round robin wraps up Friday with draws at 8:30 a.m., 1:30 and 6:30 p.m. MST (TSN-RDS). The tension on the ice Thursday evening extended to the nervous fans in the stands with three of the four games having serious playoff implications for the six teams involved. Only the Nova Scotia versus British Columbia match had nothing to do with playoffs. After five ends only three points separated the six teams on the scoreboards, with Alberta-Saskatchewan tied 2-2, Northern Ontario up one on Manitoba and Ontario, having stolen both points, up 2-0 on Quebec. After playing to blank ends through the first five, Quebec pulled even with Ontario with a deuce in the seventh. Howard responded with a single in the eighth that gave him the lead. 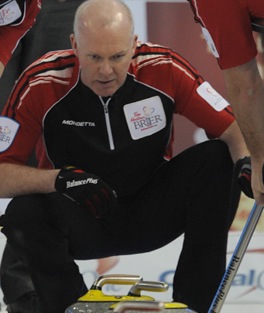 Ontario’s Glenn Howard is on his way to the Page playoff one-two game after beating Quebec on Thursday night. (Photo, CCA/Michael Burns)

“That was quite a game,” said Howard, who is the only unbeaten skip at 9-0. “Quebec kept it real simple. Jean-Michel had a shot to win but it was really tough and still close to making for one. Bottom line we’re No. 1 no matter what, that’s the first goal.” Menard said he felt his foursome missed some shots in the first half, allowing Ontario to steal singles in the second and fifth ends. “But last end lots of rock in play, which was the plan,” he said. “I had a tough shot to win and halfway down I thought I had it but I guess it just wasn’t meant to be.” Alberta and Saskatchewan traded single points until the eighth end when Virtue rubbed on a long guard on his last-rock freeze attempt, leaving Martin with a straight-forward tap back for three and a 6-3 lead. “We played so hard and to have it all come down to one missed shot is really tough to take. It’s going to be a tough one to deal with over the next couple of weeks,” said Virtue. “What’s Stoughton doing? He’s my buddy,” Martin said after his win and Manitoba’s loss. “We have a faint heartbeat but there’s still a heartbeat. I don’t think Northern Ontario’s going to lose another game so we need some help from our friends from Saskatchewan in the last game (when Virtue’s team plays Quebec).” After Manitoba and Northern Ontario traded deuces in the first two ends and singles in the third and fourth, the Jacobs crew counted one in the fifth and stole one in the sixth for a 5-3 lead. They broke it open with four in the eighth and Manitoba shook hands. “It feels good to have our backs against the wall slightly and come out and play as well as we did and put a game together especially since we struggled the last few games,” said Jacobs, the second youngest skip here at age 27. “Honestly, we all wanted to come out and put on a performance tonight and just wanting to do that so badly, made us come out and do it. Our main goal was forget about the standings, forget about everything, just come out and play well and that’s what we did.” Stoughton agreed with Jacobs’ assessment, saying he was pleased with the way his team played despite the loss. “They came out right from lead to skip and were phenomenal,” said Stoughton, a three-time Brier winner and two-time world champion. “We feel pretty good about the way we played. They were great, every draw they needed to make they made and every little runback and everything. We’re not bowing our heads after that. Still win two tomorrow we’re in the 1-2 game.” For updated scores and standings go to www.curling.ca. [flickr-gallery mode=”tag” tags=”2013brierd14″ tag_mode=”all”]