Martin out, Stoughton, Jacobs into playoffs at Tim Hortons Brier

EDMONTON – Jeff Stoughton drew the button with his last rock to put his Manitoba team into the playoffs and silence nearly 12,000 pro-Alberta fans at the Tim Hortons Brier, presented by Monsanto, and kick local favourite Kevin Martin to the sidelines. With Martin, a four-time Brier champion standing on the next sheet watching along with the noisy crowd, Stoughton’s last shot beat Andrew Bilesky of British Columbia 6-5 in an extra end. That meant Martin’s Alberta team, which had defeated defending champion Glenn Howard of Ontario 6-5 moments earlier, was eliminated from the playoffs. 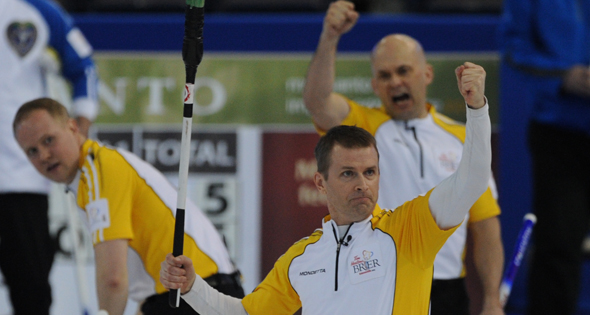 “We ran the table, which we had to,” Martin said of his team’s six-game winning streak. “B.C. gave it a good go, I’ll have to buy them a beer later.” In other games in the final draw of the round robin, Brock Virtue of Saskatchewan beat Jean-Michel Ménard of Quebec 8-5 and Brad Jacobs of Northern Ontario beat Paul Flemming of Nova Scotia 5-2, using his final stone to score three in the 10th end. The results sent Ontario (10-1), Manitoba (8-3), Brad Gushue of Newfoundland-Labrador (8-3) and Northern Ontario (8-3) into Saturday’s playoffs. Ontario will play Manitoba in the one-two Page playoff game at 1:30 p.m. MST (TSN-RDS) with Newfoundland-Labrador meeting Northern Ontario in the three-four game at 6:30 p.m. The winner of the Page one-two game goes directly to Sunday’s 6:30 p.m. gold-medal game. The loser plays in Sunday’s 8:30 a.m. semifinal against the winner of the Page three-four game. The semifinal loser and the Page three-four loser will play for the bronze medal Sunday at 1:30 p.m. Stoughton needed his last rock because his final stone in the 10th, an attempted hit-and-stick rolled too far, letting Bilesky steal a single to tie the game and send the crowd into a frenzy. But he managed to calm himself minutes later to make his critical game-winner. “It was hard (to settle down) because there was a lot of yelling. When they’re heckling and yelling at you to miss it’s a lot different from when they’re cheering for you,” he said. “I was able to calm down because it was pretty exciting out there.” “Was that something? That was Oiler playoff loud … so loud, so much fun,” Martin said of the crowd. “They were riled up on our game and also the Northern Ontario game and also the B.C. game.” The reason was Martin needed either Stoughton and his team of third Jon Mead, second Reid Carruthers, lead Mark Nichols, alternate Garth Smith and coach Rob Meakin or Northern Ontario to lose in order for Alberta to make the playoffs. Martin handed Howard his first loss but it wasn’t enough after Alberta began the round robin by losing four of its first five games. “We put ourselves in that position,” a disappointed Martin said. “The way we handled ourselves and came back strong, that was really good for our team.” 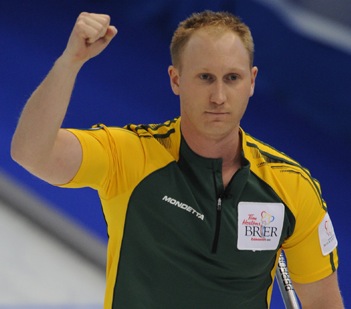 “That was one of the most exciting evenings of curling I’ve ever been involved in,” said Howard. “That was fantastic. Another epic Martin-Howard battle down to the last rock, Stoughton on the next sheet, Northern Ontario — that’s what this game is all about. I thoroughly enjoyed that evening. That was the most defeating I’ve ever witnessed in a curling arena. That crowd was, wow, something else.” B.C. and Nova Scotia, each winners of just one game this week, were trying to do their best to help Alberta and Quebec, waging tight battles with Northern Ontario and Manitoba. Jacobs got a single in the first end but Flemming blanked the next four ends before taking a single in the sixth. Jacobs made a pressure-packed, last-rock hit-and-stick to count three for the victory that carried his team of third Ryan Fry, second E.J. Harnden, lead Ryan Harnden, alternate Matt Dumontelle and coach Tom Coulterman to the playoffs. “That was too close for comfort,” Jacobs said. “We struggled at the beginning. The first end was an absolute mess and after that it was pretty wide open. Made last rock for win to get the playoffs. “I thought they would cheer for our misses and maybe be chirping a little more but they didn’t, so thank you to the Alberta fans. That’s three in a row, this is what we needed going into the playoffs.” For updated scores and standings go to www.curling.ca.   [flickr-gallery mode=”tag” tags=”2013brierd17″ tag_mode=”all”]