EDMONTON – Veteran skips Glenn Howard of Ontario and Paul Flemming of Nova Scotia were among those honoured when the Tim Hortons Brier, presented by Monsanto, annual awards and all-star teams were announced Saturday by the Canadian Curling Association. 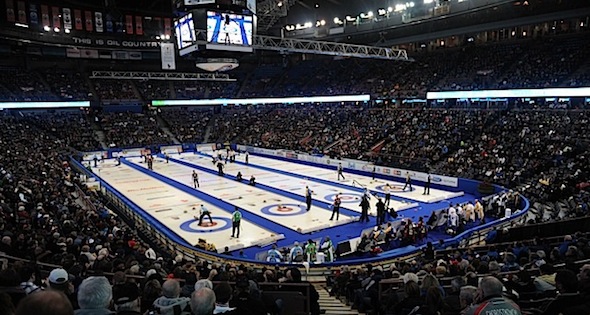 The all-star teams and award winners for the 2013 Tim Hortons Brier were announced on Saturday. (Photo, CCA/Michael Burns)

Howard, a four-time winner of the Brier who went through this year’s round robin with just one loss in 11 games, was named the first team all-star skip for the sixth time. He was the top shooting skip at 89 per cent. He was joined on the first team by teammates Wayne Middaugh at third and Brent Laing at second. Flemming was named winner of the the Ross Harstone Trophy, the player-voted sportsmanship award. Flemming also won the award in 2001. The winners were presented at the Brier Closing Reception on Saturday evening. First All-Star Team • Skip: Glenn Howard, Ontario (first-team skip in 2006, 2007, 2010, 2011 and 2012; first-team third in 1986 and 1992; second-team skip in 2008 and 2009) • Third: Wayne Middaugh, Ontario (first-team third in 2012; first-team skip in 1998 and 2001; first-team second in 1992, 1993 and 1994) • Second: Brent Laing, Ontario (first-team second in 2006, 2010 and 2012, second-team second in 2008 and 2011) • Lead: Mark Nichols, Manitoba (second-team third in 2004) Second All-Star Team • Skip: Brad Gushue, Newfoundland/Labrador (first-team skip in 2004; second-team skip in 2010 • Third: Jon Mead, Manitoba (first-team third in 2000 and 2011) • Second: Marc Kennedy, Alberta (first-team second in 2008 and 2009) • Lead: Craig Savill, Ontario (first-team lead in 2007 and 2008, second-team lead in 2006, 2010 and 2011; second-team second in 2002) Ross Harstone Award The Ross Harstone Trophy is presented each year to the player chosen by his peers as the curler in the Tim Hortons Brier who best represents Ross G.L. Harstone’s high ideals of good sportsmanship, observance of the rules, exemplary conduct and curling ability. 2013 winner: Paul Flemming, Nova Scotia (also won in 2001) Scotty Harper Award For the best curling story of 2012, as selected by the School of Journalism and Communication, Carleton University in Ottawa, the Award is in memory of the late Scotty Harper of the Winnipeg Free Press. 2013 winner: Kevin Palmer, The Curling News, for his humorous account of the early days of the 2012 Tim Hortons Brier Paul McLean Award Named in honour of the highly-respected TSN Producer of curling, CFL football, world juniors hockey, etc., who died of cancer at the age of 39 in December of 2005. The Award was presented for the first time in 2007 by the CCR and TSN to a media person behind the scenes who has made a significant contribution to the sport of curling. 2013 winner: Larry Wood, long-time curling journalist, editor of The Tankard Times and Canadian Curling Hall of Fame member.