Bronze medal for Canada at the World Juniors

Dunstone and his Winnipeg team – third Colton Lott, second Daniel Grant, lead Brendan MacCuish, alternate Josh Barry and coach Scott Grant – suffered an 11-8 loss to Russia’s Evgeny Arkhipov in the semifinal on Saturday but rallied against the Swedes, who finished fourth in the round robin and lost to Russia in the Page 3-4 game on Friday. In Sunday’s bronze-medal game, both teams kept the pressure on from the start, and Canada led 4-2 by the fifth-end break. The sixth end saw a battle to get rocks in scoring position. Canadian third Colton Lott made two perfect hits, and Dunstone followed suit, forcing Mabergs to draw for his single. In the seventh, Canada had an opportunity for a big score, but came just short when Dunstone’s last-rock double attempt didn’t curl enough, giving him only the single instead of a possible five. Lott came through for Canada again in the ninth, making two double take-outs on the way to a blank end. With a one-point lead and hammer in the 10th, Dunstone kept the house clean, scoring one for a 6-4 victory – and the bronze medal for Canada. “Obviously whenever you finish a tournament off with a win it’s a very good thing. We’re going home with a medal for Canada and that’s an unbelievable feeling,” said Dunstone. “Age doesn’t matter,” he said about being one of the youngest teams in the competition. “We just go out and play our best. Whatever happens will happen, but being able to win bronze at this age along with my whole team – we’re a young team – we hope to be back next year and hopefully do what Kyle Smith did.” In the gold-medal game, Scotland took control early and never let up, scoring five unanswered points. Russia scored two in the eighth, but Kyle Smith and his team of Thomas Muirhead, Kyle Waddell and Cameron Smith kept the pressure on, winning 6-2 and taking home the gold medal. On the women’s side, Scotland’s Hannah Fleming will play Russia’s Alina Kovaleva for the gold medal later today, while Japan’s Sayaka and Czech Republic’s Iveta Janatova will play for the bronze. The Canadian junior women (Kamloops’s Corryn Brown, Erin Pincott, Samantha Fisher, Sydney Fraser, with alternate Cathlia Ward and coach Ken Brown) were cheering from the sidelines throughout the playoffs after finishing in ninth place with a 3-6 record in the round robin. For more news, feature stories and photo galleries from the 2013 World Junior Curling Championships, visit the World Curling Federation’s event website: https://wjcc2013.curlingevents.com 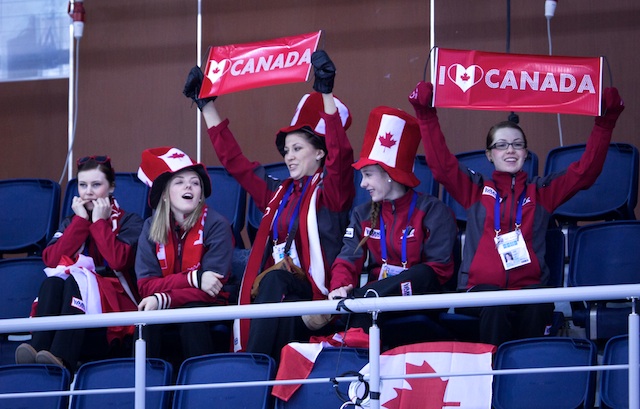