EDMONTON – Glenn Howard made his last-rock draw into the four-foot Sunday to give his Ontario team a 7-6 win over Brad Gushue of Newfoundland-Labrador in the bronze-medal game at the Tim Hortons Brier, presented by Monsanto. 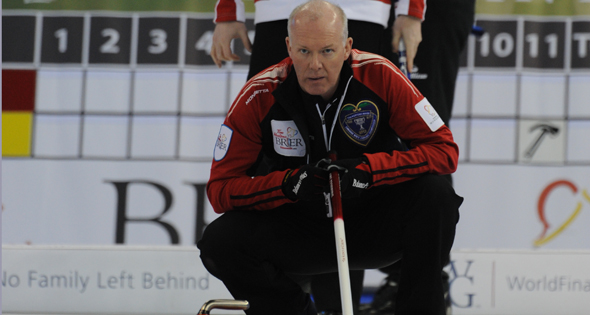 Ontario’s Glenn Howard claimed the bronze medal at the Tim Hortons Brier with an extra-end win over Newfoundland/Labrador on Sunday. (Photo, CCA/Michael Burns)

It was a bittersweet win, admitted Howard, because his team won its first 10 games before running into problems. “We shouldn’t be out there,” he said after the win that was worth $30,000 to his team. “It would have been a travesty for us to come fourth, far as I’m concerned … some of the best curling we’ve ever produced in a week and it’s unfortunate it ends on a bad note. But we didn’t produce in the playoffs and that’s what happened.” Howard, and his team of third Wayne Middaugh, second Brent Laing, lead Craig Savill, alternate Scott Howard and coach Scott Taylor lost its last game of the round robin and then dropped the Page one-two game to Jeff Stoughton of Manitoba. Howard, a four-time winner of the Brier, dropped into the bronze-medal game when he lost the Sunday morning semifinal 9-7 to Brad Jacobs of Northern Ontario. Jacobs plays Stoughton in the championship final at 6:30 p.m. MST (TSN-RDS). Gushue had finished the round robin at 8-3 with third Brett Gallant, second Adam Casey, lead Geoff Walker, alternate Jamie Korab and coach Peter Gallant. He lost to Jacobs 6-5 in the Page three-four playoff game on Saturday. His team earned $20,000 for fourth place. 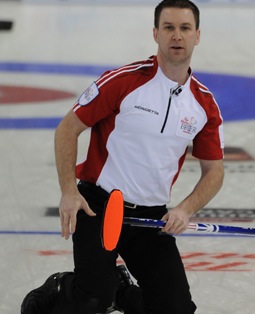 Howard and Gushue were tied 4-4 at the break. They traded deuces in the first and second, Ontario posted another pair in the third and Newfoundland-Labrador settled for one in the fourth but then stole a single in the fifth. Gushue made a superb angle raise of an Ontario guard to eliminate two Howard counters that had been hidden in the four-foot and leave himself counting. Howard couldn’t get at the stone, leaving Gushue to count and tie it 4-4. A miss on a double attempt forced Howard into taking a single in the seventh but his successful double in the eight forced Gushue into a single, leaving the teams tied at 5-5 heading into the final two ends. Gushue had three counters spread around the 12-foot in the ninth and Howard had to draw for a single, giving him the lead but Gushue the hammer coming home. The Newfoundland-Labrador skip had a shot at the win but a difficult double of two Ontario counters in the four-foot could get rid of only one shot, sending the teams to an extra end. “It’s getting a little monotonous to be honest,” said Gushue, who finished his 10th Brier without ever winning it. “We had a chance, I guess, in 10. I’m not sure I could have made it better than what we did. It sucks, to have a good week and to have it end on this note and to lose the games we lost all week.” [flickr-gallery mode=”tag” tags=”2013brierd21″ tag_mode=”all”]