A passion for curling combined with some thinking outside the box paid off with a major award from the Canadian Curling Association. “The Field Trip Friday program came about as just one of those ideas you throw out over dinner, which you never actually think will take off,” says Samantha Stouffer of Brantford, Ont., about the project that brought hundreds of schoolchildren on to the ice of the Paris Curling Club – and has earned Stouffer the CCA’s 2013 Volunteer of the Year Award. 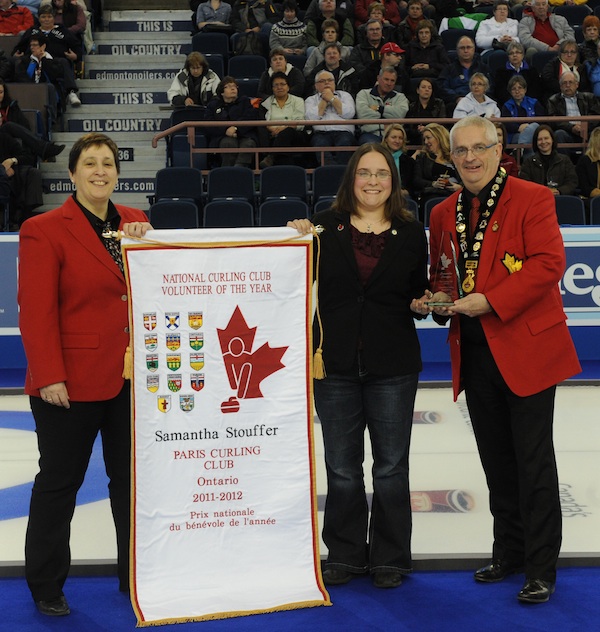 Volunteer of the Year Samantha Stouffer (centre) receives recognition at the 2013 Tim Hortons Brier in Edmonton. The banner was presented by (left) CCA governor Marilyn Neily and (right) CCA chair of the board of governors Ron Hutton (Photo CCA/Michael Burns)

Stouffer, a curler since age 11, is deeply involved in the curling life with her family at the Paris Curling Club, where she has been the Junior Program Coordinator for two years. She is also a full-time education student at Sir Wilfrid Laurier University and Nipissing University. Part of her curriculum requirements during the 2011-2012 school year was to design a practicum program based outside of the traditional classroom setting. With her background in working with her club’s youth program, the answer was simple: bring some kids to the club and teach them how to curl. “She decided to introduce curling to students grades 2-8 through a program she named Field Trip Fridays,” says Ron McLachlin, First Vice-President of the Paris Curling Club, who nominated Stouffer for the CCA’s annual award. The program was simple: Stouffer would visit a school to teach curling theory for a couple of hours, at a cost of two dollars per student. She followed up the lesson by taking the kids out on the ice on a Friday for some fun practical instruction. “When I was out advertising to schools, my goal was to get one class to participate,” says Stouffer. “If I was able to commit just one class I would have felt successful.” But word of the program spread to local schools and the phone calls and emails started to pour in. She had more requests than available time or ice, but she didn’t let that stop her. “One of my largest challenges was taking my small idea and expanding it to accommodate the large number of classes and students (who were interested),” she says. “I tried very hard not to turn classes away.” One solution was to alter the program to fit two classes (60-80 students instead of just 20-30) on the ice at once, a move that produced benefits to more than just the young curlers. “Samantha had to organize us old-timers to help with the implementation of the practical section,” says McLachlin. “Many of the seniors from our club have commented that they felt revitalized after helping out with one of these sessions.” She also had to juggle a full university course load and part-time jobs with trying to schedule the in-class instruction sections for all participating students before they came to the club on Friday. “But even though all those were challenges they were also highlights! It meant that my program was successful and in demand, which was an amazing feeling,” says Stouffer. ‘Successful’ doesn’t begin to describe the results of Stouffer’s innovative approach to introducing kids to curling, according to McLachlin. “The simple fact that 942 students were introduced to curling utilizing such a fun and informative program is an accomplishment on its own,” he says. “However the spillover effect has continued to put smiles on the faces of our board of directors and the membership in general. Our youth program within the club doubled the following season. I also heard that our competition, the Brant Curling Club, enjoyed an increase in their youth program as a direct result of the Field Trip Fridays program because a large number of these students reside in Brantford.” The treasurer of the Paris Curling Club, Donna Todd, says that the club executive was shocked when Stouffer handed over $1,884 at the end of the season – the revenue collected from the Field Trip Friday participation fees. “The monies collected truly do not tell the tale,” says Todd. “Seeing 40-50 students on the ice smiling and laughing for two hours was all I needed to witness to know Samantha has created something special.” For Stouffer the announcement that she had been selected for the CCA award came as a complete shock – “I actually jumped out of my seat with excitement!” – but her contribution as an extraordinary volunteer isn’t really all that surprising. “I grew up watching both my parents take on leadership roles at the curling club,” she says. “They have been members on the board over the years and have always encouraged my brother and me to volunteer whenever possible. I found it a great honour to be asked to take over the Sunday Junior program, and I have tried my best to give back to the club that has given me so many opportunities and wonderful memories.” “I truly believe that Samantha’s commitment and tireless work towards youth and curling while maintaining her grades in university defines her as Volunteer of the Year,” says McLachlin. “Her commitment to curling with the youth of our community is unmatched not only here in the small town of Paris, but, I’m confident, across the entire country.”