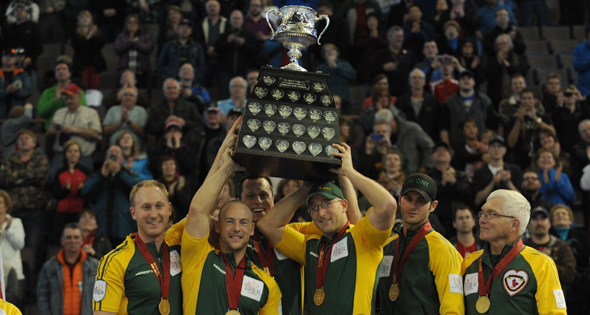 “Oh my God, I don’t even know how to feel, it’s so overwhelming,” the 27-year-old skip said immediately after his decisive 11-4 victory. “We’re Brier champs, it’s a dream come true, what we’ve wanted since we were kids. “I’m so proud of the guys, the way they played. We played amazing throughout the playoffs. We were underdogs the whole way, never had hammer, and to come out and do what we did is just phenomenal.” httpvh://www.youtube.com/watch?v=69DjZ15uOeI Jacobs has loved the hitting game all week and he stayed with it in the fourth end Sunday to execute a razor-thin pick to score three that propelled his Northern Ontario team to its first Tim Hortons Brier championship. With 10,897 enthusiastic fans on hand – bringing the 10-day total to 190,113, eighth highest total in Brier history — Jacobs was up 3-2 when the pivotal play of the game came in the fourth. Northern Ontario was sitting one in the four-foot with Manitoba second shot directly in front. Sensing the chance to open up a big lead Jacobs elected to go for the pick rather than draw for a pair. He made the shot perfectly for three. 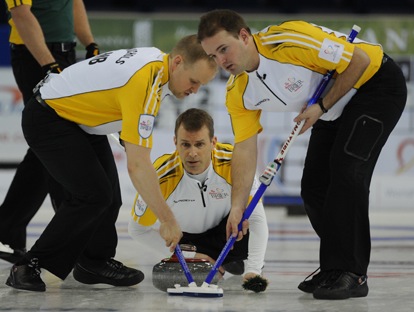 It wasn’t really a gamble, Jacobs said afterwards, because he was confident after having made a similar shot against reigning world champion Glenn Howard of Ontario in the morning semifinal. “Draw for two was the other option,” he explained. “Looking at the shot, when you look at it long enough and you know that’s your style of shot it came down to just put the broom down and go throw it. “When I let it go it was a little wide, wasn’t sure it would come back. But you could see at the hog line, you could tell it was curling nice … I knew it coming over. That was a huge shot to open that game up.” The shot pushed Jacobs and his team of third Ryan Fry, second E.J. Harnden, lead Ryan Harnden, alternate Matt Dumontelle and coach Tom Coulterman to a 6-2 lead. They opened the game by stealing two in the first and a single in the second. In the first Northern Ontario buried a shot behind a long line of guards and after Jacobs made a picture-perfect draw to the button to sit two, Stoughton tried the same path but was heavy. In the second a last-rock nose hit by Stoughton led to the steal and a 3-0 lead for Northern Ontario. “The first end was tough, we missed three doubles in a row,” said a disappointed Stoughton. “My first one came up a foot light and then just didn’t curl on my second one. Second end same thing, we didn’t position well and they made some great shots.” Stoughton, who lost to Jacobs 9-4 in the round robin, made two excellent draws in the third to get two back before disaster hit him in the fourth. 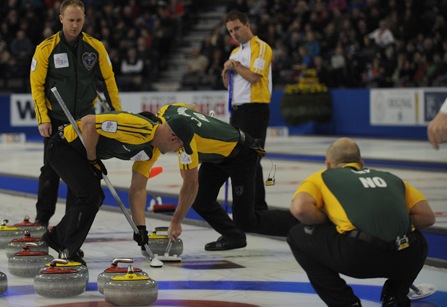 It was a team effort as Northern Ontario claimed its first Tim Hortons Brier victory since 1985 on Sunday in Edmonton. (Photo, CCA/Michael Burns)

“Surprisingly I let that one go in four and the guys jumped it,” he said of his last rock. “It wasn’t their fault, it still went through the house and then Brad made a great shot.” The Manitoba team of third Jon Mead, second Reid Carruthers, lead Mark Nichols, alternate Garth Smith and coach Rob Meakin had an open draw for two in the fifth to pull within 6-4 at the break. The Manitoba skip, who won the Brier in 2011, was wide with a freeze attempt in the sixth, leaving Jacobs an open house to draw for another two and an 8-4 lead that he nursed to the championship. Howard beat Brad Gushue of Newfoundland-Labrador 7-6 in the bronze medal game. Jacobs and Co. were in the middle of the pack midway through the round robin when they beat Manitoba 9-4 to kick-start their run to the title. “When we beat Manitoba in the round robin, when our backs were against the wall, that was the turning point for our Brier,” said Jacobs. “We went out, put on a massive performance, got ourselves to 6-3 — that was the turning point.” Still, they needed a last-rock victory over Nova Scotia in the final game of the round robin just to get into the playoffs. That was their third straight win and the pressure-packed victory sent them into the playoffs full of confidence and they showed no signs of cracking in their wins over Gushue in the Page three-four game Saturday and a 9-7 win over defending Brier and world champion Howard in the Sunday semifinal. Their Tim Hortons Brier victory was the first for a Northern Ontario team since Al Hackner of Thunder Bay won his second Brier in 1985 and only the fourth for the area in Brier history. “I was born in ’85, so I think it’s time,” for another Northern Ontario win Jacobs said after his semifinal win put him into his first Brier final. The Jacons foursome will now represent Canada at the Ford World Men’s Curling Championship, presented by Booster Juice in Victoria March 30 to April 7. Howard won last year’s world title. In addition to wearing the Maple Leaf in Victoria, Jacobs will be in contention to play at the 2014 World Financial Group Continental Cup in Las Vegas (the Canadian teams will be determined following the 2013 Tim Hortons Roar of the Rings Canadian Curling Trials in Winnipeg in December) and becomes one of the teams eligible for either the Capital One Road to the Roar Pre-Trials in Kitchener, Ont., or the Trials in Winnipeg, which will determine Canada’s representatives for the 2014 Olympic Winter Games in Sochi, Russia. Kevin Martin of Alberta, Howard and Stoughton have already qualified for the Trials. Teams that made the Brier playoffs earn a share of $130,000 in cresting television exposure value: $40,000 each to Jacobs and Stoughton, $30,000 to Howard for winning the bronze-medal game and $20,000 to Gushue, who finished fourth. As well, the Jacobs team will earn $144,000 in Sport Canada funding over a two-year period as well as $40,000 from Own The Podium for training and competition expenses and an additional $10,000 for wearing a Tim Hortons sponsorship crest at the Ford World Men’s Championship. Next year’s Brier will be in Kamloops, B.C. [flickr-gallery mode=”tag” tags=”2013brierd22″ tag_mode=”all”]