They’re among the youngest players in the field, and from on the most sparsely populated of the Canadian Curling Association’s 14 Member Associations. But Mitch Young and Chelsea Duncan aren’t letting those factors get in their way at the inaugural Canadian Mixed Doubles Trials national curling championship at the Leduc Recreation Centre in Leduc, Alta. 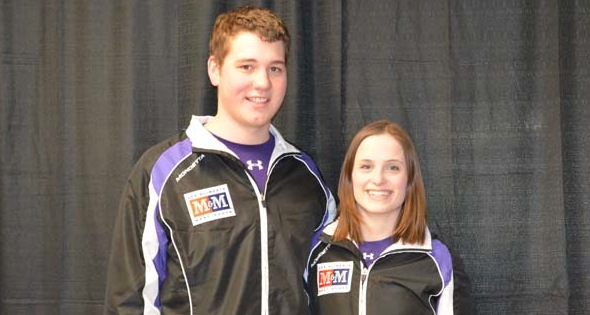 The Yukon Territory duo won its fourth straight game on Friday night, cruising to a 10-5 win over Derek Owens and Danielle Sicinski (1-4) of Saskatchewan. The win lifted Young and and Duncan to a 4-1 record in Pool B, behind only the unbeaten Saskatchewan entry of Dean Hicke and Chantelle Eberle. Young and Duncan both competed at the 2013 M&M Meat Shops Canadian Junior Men’s and Women’s Curling Championships earlier this year in Fort McMurray, Alta., where Duncan earned first all-star third honours after leading her position in shooting percentage. Young, meanwhile, won gold with Nova Scotia’s Sarah Sears in a mixed doubles tournament for players from non-playoff teams. Hicke and Eberle, meanwhile, kept up their hot shooting, improving to 5-0 with an 8-2 win over Ian Moir and Marta Moir of the Northwest Territories (0-5). In the other Pool B games, Newfoundland/Labrador’s Jamie Danbrook and Erin Porter (2-3) won a wild 13-10 decision over Saskatchewan’s Cole Tenetiuk and Alison Ingram, nailing down the victory with three in the eighth end; and the Saskatchewan/Manitoba entry of Josh Heidt and Jenna Loder (4-1) turned back Alberta’s Jason Larence and Melanie Puzzie (1-4) 7-3. In other fifth-round results: Pool A — Ontario’s Scott McDonald and Jaclyn Rivington won a battle of the unbeatens, stealing deuces in the second and third ends to knock off Saskatchewan’s Dustin Kalthoff and Nancy Martin 9-2. The win left McDonald and Rivington alone in top spot at 5-0 while Kalthoff and Martin dropped to 4-1. In other games, Matt Lang and Jessica Hanson of Saskatchewan (3-2) scored four in the second end, and put the game away with steals of one in the fifth end and two more in the sixth for a 9-4 win over B.C.’s Norm Richard and Debbie Girard (0-5); New Brunswick’s Avery Hughson and Shelby Wilson (2-3) kept their playoff hopes alive with a 7-5 win over Quebec’s Michel Briand and Genevieve Frappier (2-3); and father-daughter duo Ernie Daniels and Sarah Daniels of B.C. (2-3) shaded Nova Scotia’s Mark Dacey and Heather Smith-Dacey 5-4. Pool C — Saskatchewan’s Jason Ackerman and Colleen Ackerman fell from the ranks of the unbeaten, bowing 9-7 to the youngest team in the field. Fourteen-year-old Tyer Tardi and 16-year-old Dezaray Hawes pulled into a tie for top spot with the Ackermans and Manitoba’s Sean Grassie and Karen Klein, all at 4-1. The Manitobans moved into the logjam with an 8-6 win over fellow Manitoba duo Kelsey Boettcher and Kelly Lauber (2-3). In the other games, Alberta’s Matt Blandford and Darah Provencal (3-2) scored three in the first and fourth ends in a 10-4 triumph over Lyle Walker and Kristen Walker of Alberta (0-5); and Dale Parker and Janice Parker (2-3) needed an extra end to defeat Kyle Leach and Cori Dunbar (1-4) 11-8 in an all-Alberta tilt. Pool D — Robert Desjardins and Isabelle Neron of Quebec (4-1) suffered their first loss of the Trials, giving up a crucial steal of two in the seventh end in a 7-6 extra-end setback to the Yukon’s Robert Smallwood and Jody Smallwood (1-4). Meanwhile, Saskatchewan’s Mike Armstrong and Ashley Quick picked up a crucial 6-5 win over Alberta’s Chris Schille and Erin Carmody. Armstrong and Quick improved to 4-1 with the victory, while Schille and Carmody dipped to 3-2. In other games, Northern Ontario’s Steve Chenier and Courtney Chenier (1-4) picked up their first win, shading Alberta’s Deryk Kuny and Erica Ortt 6-5; and Newfoundland/Labrador’s Stephen Shepherd and Donna Davis (3-2) turned back Saskatchewan’s Bob Ziegler and Barb Cressman (2-3) 6-4. The 2013 Canadian Mixed Doubles Trials continue on Saturday with round-robin draws are set for 9 a.m., 11:30 a.m., 2 p.m. and 4:30 p.m., and the first round of the playoffs going at 8:30 p.m. The winning team in the four-day competition will earn the right to represent Canada at the World Mixed Doubles Championship, April 13 to 20 at the Grant-Harvey Centre in Fredericton, N.B. The competition format consists of 32 teams (each team consists of one male curler and one female curler) divided into four pools of eight, with the top two from each pool after the round robin plus the four teams with the next-best records advancing to a 12-team single elimination playoff. The gold-medal game is scheduled for Sunday at 4 p.m. MDT. For more information on the 2013 Canadian Mixed Doubles Trials, including the team list, standings and draw times, go to www.curling.ca/2013mixeddoubles/. For more information on the 2013 World Mixed Doubles Championship, go to: www.wmdcc2013.curlingevents.com/