Canada bounces back with a win at World Women’s

Team Canada’s Rachel Homan bounced back from an opening day loss to score a 7-5 victory over Latvia’s Iveta Staša-Šaršune on Sunday afternoon in Riga, Latvia. Homan and her Ottawa team of Emma Miskew, Alison Kreviazuk and Lisa Weagle, (with alternate Stephanie LeDrew and coach Earl Morris) controlled most of the game, reading the ice and rocks effectively and forcing mistakes – and some big shots – from Staša-Šaršune who kept it close with a couple of steals late in the game. 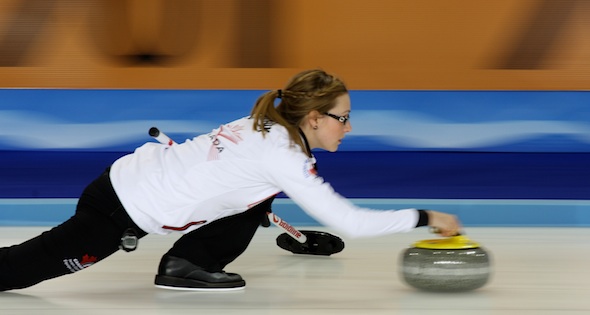 “I didn’t really know anything about their team – we’ve never played them before,” said Homan afterwards. “But we knew it was going to be a tough game.” Canada led 7-3 after seven ends and appeared to have control, but Homan gave up a steal of one in eight when she attempted a tricky take-out around a long guard and rolled too far. In the ninth, Staša-Šaršune came through for her team again, drawing the button behind guards and forcing Homan to attempt a difficult in-off take-out – producing another steal and reducing Canada’s lead to two. But for Latvia, it wasn’t enough. Homan played an aggressive 10th end, and secured the 7-5 victory without having to throw her final rocks. Despite the steals, Team Canada showed that they had regrouped after a disappointing loss to Scotland’s Eve Muirhead on Saturday, returning to the confident style that won them the national championship at the Scotties Tournament of Hearts in Kingston last month. “It’s really important for us to keep on winning,” Homan said. “We want to try and make play-offs first and then take it from there.” The Titlis Glacier Mountain World Women’s Curling Championship 2013, presented by Ford Motor Company of Canada, continues on Sunday afternoon when Canada meets Denmark’s Lene Nielsen at 1 p.m. EDT. All of Team Canada’s games are being broadcast by TSN/RDS, the official broadcast partner of the Season of Champions. Note that the Canada-Denmark game will be streamed on TSN.ca at 1 p.m. EDT, and broadcast on TSN2, tape-delayed at 4 p.m. EDT. Event news, live scores and galleries can be found on the event website: https://wwcc2013.curlingevents.com