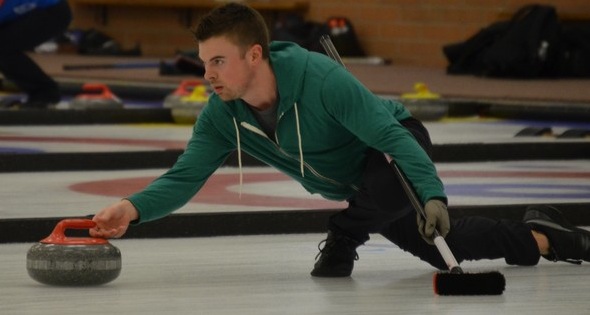 Saskatchewan’s Dustin Kalthoff and his partner Nancy Martin will take on Quebec’s Robert Desjardins and Isabelle Neron for the gold medal at the 2013 Canadian Mixed Doubles Trials.(Photo, Alexander A. Patton / CAPTAINmedia)

At stake is the first Canadian championship ever awarded in the growing discipline, as well as the chance to represent Canada at the 2013 World Mixed Doubles Championship, April 13 to 20 at the Grant-Harvey Centre in Fredericton, N.B. Kalthoff and Martin advanced by beating another Saskatchewan team, Dean Hicke and Chantelle Eberle, 7-4 in the semifinal round. Kalthoff and Martin scored deuces in the second and fourth ends, and then put the game away when Martin made a wonderful in-off to score three in the sixth end. It was the first loss for the duo of Hicke and Eberle, who won the national mixed team championship last season and played for Canada at the 2012 World Mixed Doubles Championship in Turkey. Desjardins and Neron, meanwhile, broke out to an early lead thanks to a count of three in the first end and a stolen deuce in the second en route to a 7-6 victory over Nova Scotia’s Mark Dacey and Heather Smith-Dacey. The Nova Scotians fought back with two in the third and stolen points in the fourth and fifth ends, but Desjardins made a wonderful raise double-takeout in the sixth to set up a decisive deuce. Both semifinal losers were awarded bronze medals. For more information on the 2013 Canadian Mixed Doubles Trials, including the team list, standings and draw times, go to www.curling.ca/2013mixeddoubles/. For more information on the 2013 World Mixed Doubles Championship, go to: www.wmdcc2013.curlingevents.com.