It’s down to the final four at the inaugural edition of the Canadian Mixed Doubles Trials national curling championship. One semifinal will pit Nova Scotia’s Mark Dacey and Heather Smith-Dacey against Quebec’s Robert Desjardins and Isabelle Neron; the other will be an all-Saskatchewan affair featuring Dean Hicke and Chantelle Eberle, who played for Canada at last year’s World Mixed Doubles Championship in Turkey, against Dustin Kalthoff and Nancy Martin. 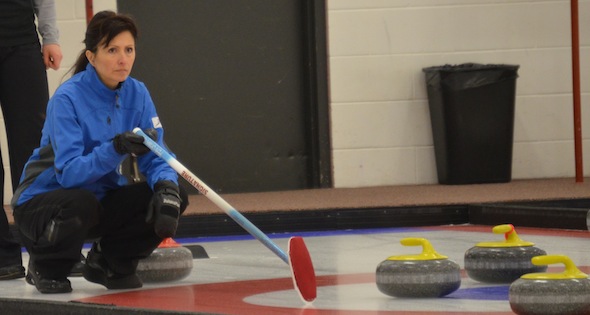 Isabelle Neron holds the broom for teammate Robert Desjardins during their quarter-final win at the 2013 Canadian Mixed Doubles Trials in Leduc. (Photo, Alexander A. Patton / CAPTAINmedia)

The winners of the 1 p.m. (all times Mountain) semifinals will meet in the gold-medal game at 4 p.m., with the right to wear the Maple Leaf at the 2013 World Mixed Doubles Championship, April 13 to 20 at the Grant-Harvey Centre in Fredericton, N.B., on the line. Dacey and Smith-Dacey, who combined to win the 2010 national team mixed title and would have represented Canada at the 2010 World Mixed Doubles Championship in Russia had the Icelandic volcano eruption not affected their travel plans, advanced with an efficient 7-2 win over Manitoba’s Sean Grassie (a former bronze-medallist at the world mixed doubles championship) and Karen Klein. Dacey and Smith-Dacey opened with three in the first end, took two more in the third and stole singles in the fourth and fifth ends to take control. Desjardins and Neron, meanwhile, prevailed 11-10 in a topsy-turvy game against previously unbeaten Scott McDonald and Jaclyn Rivington of Ontario. Rivington and McDonald scored three-enders in the third, fourth and sixth ends to take a 10-7 lead. But Desjardins and Neron responded with three in the seventh and stole the winning point in the eighth when Rivington’s last-rock takeout attempt failed to curl enough to remove shot rock. Hicke and Eberle remained the lone unbeaten team in the field, winning their eighth straight, 8-7 over Robert Smallwood and Jody Smallwood of the Yukon, taking two in the last end for the victory. The Smallwoods had stolen one in the seventh end to take the lead before Hickey and Eberle manufactured their winning deuce. Kalthoff and Martin were like clockwork in their 8-5 win over Mike Armstrong and Ashley Quick of Saskatchewan. Kalthoff and Martin scored deuces in the second, fourth, sixth and eighth ends after giving up a stolen point to Armstrong and Quick in the first end. For more information on the 2013 Canadian Mixed Doubles Trials, including the team list, standings and draw times, go to www.curling.ca/2013mixeddoubles/. For more information on the 2013 World Mixed Doubles Championship, go to: www.wmdcc2013.curlingevents.com/