Team U.S.A.’s Erika Brown took advantage of some inconsistent play by Canada’s Rachel Homan to score an extra-end 5-4 victory in Monday evening action at the Volvo Sports Centre in Riga, Latvia. For Homan and her Ottawa team – Emma Miskew, Alison Kreviazuk and Lisa Weagle, with alternate Stephanie LeDrew and coach Earl Morris – it was a game of misses, as they struggled with draw weight and line calls. 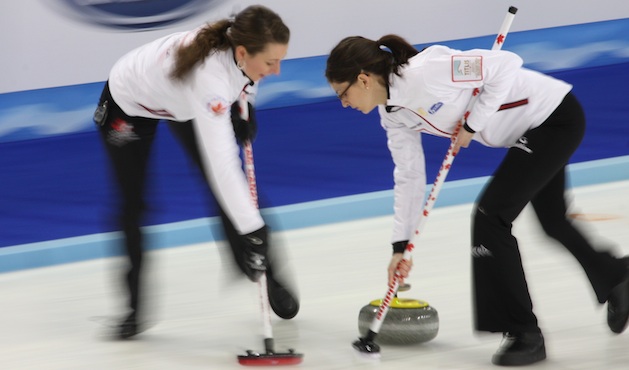 After a defensive first end blanked by Canada, Brown put the pressure on in the second. Drawing both her shots behind cover, she forced Homan to draw for a single. Taking advantage of some Canadian misses in the fourth, Brown stole one when Homan’s final draw slid too far. As Brown continued to press, Homan struggled again with her draw weight and was only able to score one in the fifth, leaving the teams tied 2-2 heading into the fifth-end break. The second five ends  saw misses from both sides as each tried to take control and crack the game open. Trailing 4-3 in the tenth, Homan elected to draw for one to tie, rather than attempt a tricky double for the win. In the extra end, Canada put a rock on the back of the four-foot and threw up a series of guards. When Brown removed the rock – leaving a U.S. biter at the back of the rings – Homan nosed a take-out, leaving her rock exposed. Brown hit and rolled out, scoring one for the 5-4 win. “The double wasn’t there and we would have rolled out and maybe have taken my own with it,” said Homan about the choice to go for the extra end. “They had a lot of catchers, so I don’t think the double was there.” “They played really well and we weren’t there tonight,” she said. “We were on a lot of different levels, but I think we’ll come back firing tomorrow.” The loss puts Canada into a log jam of teams tied at 3-2, including Germany, Switzerland, Russia, Japan and the U.S.A. Sweden (5-0) remains the only undefeated team in the round robin, and Eve Muirhead of Scotland moves into second place with a 4-1 record. The Titlis Glacier Mountain World Women’s Curling Championship 2013, presented by Ford Motor Company of Canada, continues on Tuesday when Team Canada meets Italy’s Diana Gaspari (2-3) at 7:30 a.m. and Sweden’s Margaretha Sigfridsson at 12:30 p.m. (all times EDT). All of Team Canada’s games are being broadcast by TSN/RDS, the official broadcast partner of the Season of Champions. Event news, live scores and galleries can be found on the event website: https://wwcc2013.curlingevents.com