Canada bounces back with a morning win against Germany

It was bounce-back morning for Team Canada, putting Tuesday’s disappointing loss behind them to earn an 8-5 win over Germany’s Andrea Schoepp on Wednesday morning. With only two days of round-robin play left, Homan and her Ottawa team – Emma Miskew, Alison Kreviazuk and Lisa Weagle, with alternate Stephanie LeDrew and coach Earl Morris – wanted to avoid losing touch with the leaders, Sweden and Scotland. 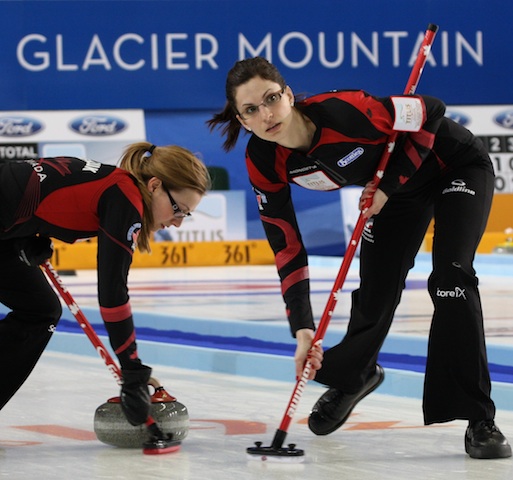 “We lost a close one last night that we played well in,” said Canadian third Emma Miskew about the loss to Sweden’s Margaretha Sigfridsson. “We just battled back this morning and tried to play at the same intensity level.” That’s exactly what Homan did, forcing Schoepp – the 1988 and 2010 world champion – to play tough shots and making the most of the German team’s misses. “It was really good to bounce back,” said Homan. “Morning games seem to be our thing.” In the second end, after blanking the first, Homan came through a port to make a run-back double. Schoepp attempted to follow but wrecked on a guard, leaving Canada an open draw for two. Schoepp stormed back in the fifth end when Homan’s draw attempt went surprisingly straight and tapped a German stone into the house, leaving a hit for three. Trailing 4-3 at the break, Canada regrouped. Homan took back control to score a deuce in six and steal the next two ends for a 7-4 lead after seven. Schoepp and her young team were unable to catch the confident Canadians. “It’s tough to tell how far away we are from being at our best,” said Homan. “The ice doesn’t let us play 100 per cent games, but we’re still making some real good shots. We’re just going to try to have a shot to win it at the end, and that’s all we need.” Homan now has a 5-3 record, tied with the U.S.’s Erika Brown for fourth spot, behind Sweden’s Sigfridsson (7-1), Scotland’s Eve Muirhead (6-1) and Russia’s Anna Sidorova (5-2). The Titlis Glacier Mountain World Women’s Curling Championship 2013, presented by Ford Motor Company of Canada, continues on Wednesday when Team Canada meets Switzerland’s Silvana Tirinzoni (4-3) at 12:30 p.m. (all times EDT). All of Team Canada’s games are being broadcast by TSN/RDS, the official broadcast partner of the Season of Champions. Event news, live scores and galleries can be found on the event website: https://wwcc2013.curlingevents.com