Team Canada will open the playoffs on Saturday morning at the 2013 Titlis Glacier Mountain World Women’s Curling Championship, presented by Ford Motor Company of Canada, but an opponent won’t be known until some time Friday. The Canadian team —  skip Rachel Homan, third Emma Miskew, second Alison Kreviazuk, lead Lisa Weagle, alternate Stephanie LeDrew and coach Earle Morris — will play in the Page playoff three-four game Saturday at 8 a.m. (all times Eastern) against the survivor of a three-team tiebreaker for the fourth and final playoff position. 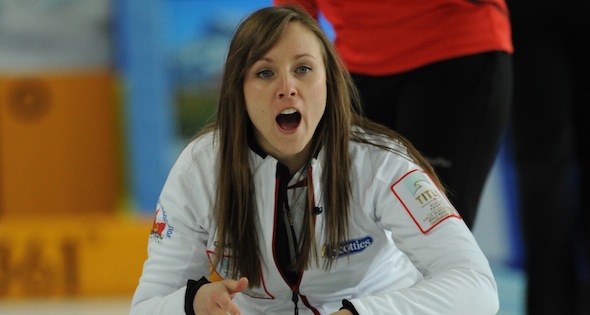 Rachel Homan and her Canadian teammates will have the day off on Friday before opening the playoffs on Saturday at the Titlis Glacier Mountain World Women’s Curling Championship, presented by Ford Motor Company of Canada. (Photo, CCA/Michael Burns)

The tiebreakers are scheduled for Friday at the Volvo Sports Centre in Riga, Latvia, with three 6-5 teams — Erika Brown of the U.S., Anna Sidorova of Russia and Silvana Tirinzoni of Switzerland — playing down for the right to play Canada on Saturday. That scenario was set up in the final round-robin draw on Thursday when the U.S. beat Russia 6-5 in an extra end, and the Swiss knocked off Denmark’s Lene Nielsen 8-5. Russia will play Switzerland in the first tiebreaker at 3 a.m. on Friday, with the winner moving on to play the U.S. for the final playoff berth at 8 a.m. The Canadians, 8-3 in the round robin, enter the playoffs winners of four straight games, including twice on Thursday: 7-4 over China’s Bingyu Wang and then 8-4 over Japan’s Satsuki Fujisawa. The winner of the 3-4 game will play in the semifinal on Saturday at 1 p.m. against the loser of the Page 1-2 game between Scotland’s Eve Muirhead and Sweden’s Margaretha Sigfridsson, who both finished the round robin with 10-1 records (the Swedes finish first based on their round-robin victory over the Scots in the first draw). The Page 1-2 game is Friday at 1 p.m., and will be broadcast by TSN and RDS2. The semifinal winner will advance to Sunday’s gold-medal game (8 a.m.) against the Page 1-2 winner. The semifinal loser will play the Page 3-4 loser in the bronze-medal game Sunday at 3 a.m. All of Team Canada’s games are being broadcast by TSN/RDS, the official broadcast partner of the Season of Champions. Event news, live scores and galleries can be found on the event website: wwcc2013.curlingevents.com.