Team Canada locks down third, playoffs up next 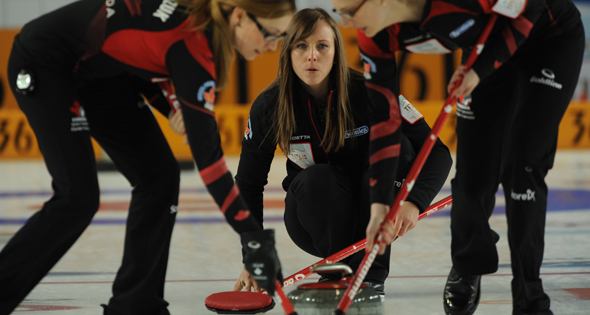 Now, it’s time to wait for the Canadians, who completed round-robin play with an 8-3 record to advance to the Page playoff 3-4 game on either Friday or Saturday. “It’s our first time at women’s worlds. It’s amazing, we’re really excited to make playoffs,” said Homan. “We’ve had to battle all week but I’m really proud of my team. We’ll try not to think about curling tonight and prepare as best as we can for the 3-4 game.” The schedule for the Page playoff games won’t be determined until after the final round-robin draw in Riga, which gets underway today at 12:30 p.m. (all times EDT). Should Erika Brown of the U.S. (5-5) defeat Russia’s Anna Sidorova (6-4), there would be a tiebreaker for the fourth and final playoff spot. Switzerland’s Silvana Tirinzoni could also get in the tiebreaker mix with a victory over Denmark’s Lene Nielsen (4-6). The winner of the 3-4 game will play in the semifinal on Saturday at 1 p.m. against the loser of the Page 1-2 game between Scotland’s Eve Muirhead and Sweden’s Margaretha Sigfridsson, who both finished the round robin with 10-1 records (the Swedes finish first based on their round-robin victory over the Scots in the first draw). The semifinal winner will advance to Sunday’s gold-medal game (8 a.m.) against the Page 1-2 winner. The semifinal loser will play the Page 3-4 loser in the bronze-medal game Sunday at 3 a.m. Canada was never really threatened by Japan. The game couldn’t have opened any better for Homan and Co., with a steal of two in the first end when Canada had two rocks in the four-foot, and Fujisawa was heavy with her last-rock draw. Fujisawa drew for a single in the second looking at three Canadian counters, but Canada took control for good with a deuce in the third thanks to a raise-takeout from Homan to remove the Japanese shot-stone. Fujisawa’s roll-outs on open hits in the next two ends gave stolen singles to Canada and a 6-1 lead at the fifth-end break. Canada stole one more in the seventh when Fujisawa just missed on a tough triple takeout. Fujisawa made her best shot of the game in the eighth, a double takeout to score three, but the damage had already been done. Canada scored one in the ninth and ran the Japanese out of rocks in the 10th. All of Team Canada’s games are being broadcast by TSN/RDS, the official broadcast partner of the Season of Champions. Event news, live scores and galleries can be found on the event website: wwcc2013.curlingevents.com.