Leaders get some breathing room at CIS-CCA Nationals

The rich got richer on Day 2 of the 2013 CIS/CCA Curling Nationals in Kamloops, B.C. The unbeaten rinks stayed that way after two more draws on Thursday at the Kamloops Curling Club. 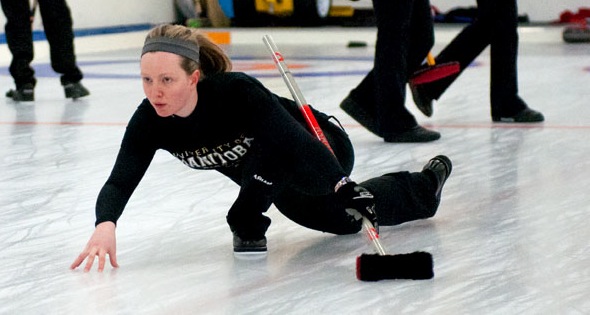 On the men’s side, Alberta’s Brendan Bottcher and Waterloo’s Jake Walker (the 2012 and 2010 Canadian junior champions respectively) both raised their records to 4-0. They are on a collision course to meet Friday in the afternoon (2 p.m., all times Pacific) draw. On Thursday, Bottcher’s Golden Bears opened up with an 8-4 win over the Dalhousie Tigers (Lee Buott) and followed up with 5-3 win over the host Thompson Rivers University WolfPack (Darren Nelson). Walker’s Warriors, meanwhile, beat the Acadia  Axemen (Robert Mayhew) 6-5  in the morning draw and disposed of the Manitoba Bisons (Steen Sigurdson) 8-1 in the evening draw. TRU is in a three-way tie with Dalhousie and Acadia for third place at 2-2. The WolfPack  hammered the Carleton Ravens (Brett Lynn-Hatcher) 10-5. The Axemen beat Trent University Excalibur (Mike Bryson) 8-3 in the evening draw while Dalhousie took care of the Carleton Ravens 8-2. The rest of the men’s standings have Carleton and Manitoba at 1-3 while Trent has yet to taste victory in four starts. In the women’s event, it is Alberta and Manitoba who are setting the pace with four straight wins. Alberta’s Kelsey Rocque racked up an 8-5 victory over the Saint Mary’s Huskies (Sara Spafford) 8-5 and then needed an extra end to dispose of Thompson Rivers University (Tiffany Krausher) 4-3. Manitoba’s Breanne Meakin began the day with a 10-8 win over the McMaster Marauders (Ginger Coyle) and followed it up with a 9-5 decision over the Western Mustangs (Caitlin Romain). Alberta and Manitoba aren’t set to meet until the final round-robin draw on Saturday morning. Thompson Rivers,  St. Mary’s and McMaster are sitting in third place with 2-2 records. The WolfPack played the Guelph Gryphons to open play Thursday and beat Jaimee Gardner’s foursome 8-4. Guelph and the UPEI Panthers (Veronica Smith) are standing with 1-3 records. UPEI fell 7-6 to McMaster in Draw 4. Western is winless in four starts. Action continues on Friday with draws at 9 a.m. (all times Pacific) and 2 p.m. Round Robin play winds up Saturday morning with the championship final set for 2 p.m. on Sunday. Results, schedule and team information are available at www.curling.ca/championships/university/