Canada through to semifinal at Women’s Worlds

Canada’s Rachel Homan just took one step closer to the gold-medal game after defeating the U.S.’s Erika Brown 7-6 in the Page 3-4 game today in Riga, Latvia. Homan and her Ottawa team – Emma Miskew, Alison Kreviazuk and Lisa Weagle, with alternate Stephanie LeDrew and coach Earl Morris – will meet Scotland’s Eve Muirhead in the semifinal of the Titlis Glacier Mountain World Women’s Curling Championship 2013, presented by Ford Motor Company of Canada. “We had a very strong game , the whole team,” said Homan today’s win. “There were great shots we made and we’ve just got to keep going and do the same thing tonight.” 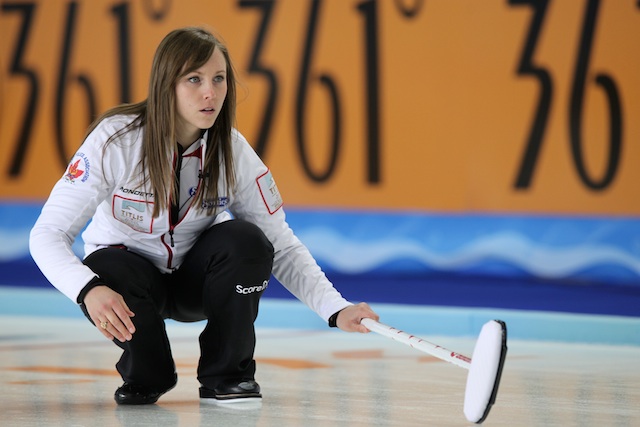 Canada finished in third place after the round robin and secured a spot in the Page 3-4 playoff game after defeating Japan in the final round-robin game.  It wasn’t as easy for Brown, who had to fight through a tie-breaker after finishing tied for fourth place in the standings with Russia’s Anna Sidorova and Switzerland’s Silvana Tirizoni. The U.S. squad defeated Switzerland 7-4 on Friday morning in a nail-biter that came down to last rock, earning their spot in the Page 3-4 playoff. Canada came out strong and dominated play throughout most of the game, the only hiccup coming in the fourth end when Homan’s tap-back attempt slid by, giving up a steal of one. Otherwise, it was all Canada. In the first end, faced with a choice between a soft tap on a U.S. stone on the button just peaking out from behind cover, or throwing the in-off hit to remove the stone, Homan calmly chose the big-weight shot, making it look easy and taking her deuce. In the third, Homan again showed the precision hitting that has become her trademark. A hit and roll removed the U.S. counter and just nudged another into the wings to score two. Brown, a two-time silver-medallist playing in her seventh world championship, struggled to generate offence against the effective rock placement of the Canadians. It was an uphill climb, but in the fifth end, she was able to draw behind cover just far enough to escape Homan’s last-rock tap, stealing a single for a 4-3 Canadian lead heading in to the fifth-end break. Canada never relinquished the lead after that. Forcing Brown to take one in the ninth, Homan held a 7-5 lead heading in to the 10th end and used hammer to hit out the game for the 7-6 win. “I guess we’re on a roll with five wins in a row,” she said. “We want to keep it going obviously, we really want to get into that gold medal game, so we’ve got one more to go yet. I think if we play like that, I don’t think anyone’s going to beat us.  We’ve just got to  keep playing like that, stay confident and support each other.” Team Canada meets Scotland in the semifinal of the Titlis Glacier Mountain World Women’s Curling Championship 2013, presented by Ford Motor Company of Canada, on Saturday at 1 p.m. EDT. The loser of that game will play for the bronze medal against the U.S.A. on Sunday at 3 a.m. EDT. All of Team Canada’s games are being broadcast by TSN/RDS, the official broadcast partner of the Season of Champions. Event news, live scores and galleries can be found on the event website: https://wwcc2013.curlingevents.com