Team Canada to play for bronze at World Women’s

Canada’s Rachel Homan will play for the bronze medal at the 2013 Titlis Glacier Mountain World Women’s Curling Championship, presented by Fort Motor Company of Canada. Homan’s last-rock runback double-takeout attempt for the victory in the 10th end in Saturday’s semifinal at the Volvo Sports Centre in Riga, Latvia, failed to curl enough, producing a jam and a stolen point for Scotland’s Eve Muiread and an 8-7 victory. 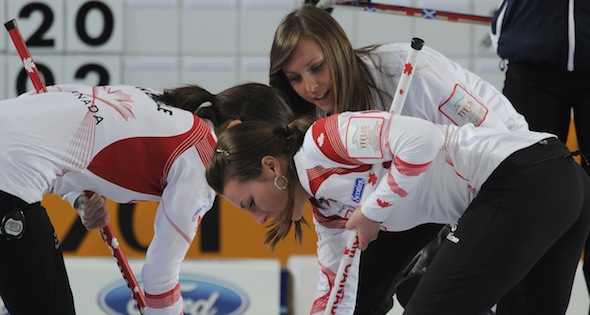 With the victory, Scotland will play Sweden’s Margaretha Sigfridsson in the gold-medal game on Sunday at 8 a.m. (all times Eastern) on TSN and RDS. Homan’s Canadian team (third Emma Miskew, second Alison Kreviazuk, lead Lisa Weagle, alternate Stephanie LeDrew and coach Earle Morris), meanwhile, will play Erika Brown of the United States for the bronze Sunday at 3 a.m. (TSN2, RDS2). “I think we deserved to win that game,” said Miskew. “I think we played really well and we deserved it but it sucks it came down to that, but what you going to do? They made a nice shot and it was a tough one.” The teams spent the first eight ends trading a series of wonderful shots in this battle of two of the best young teams on the planet. The Scots went hard early, putting corner guards in play in the first end and being rewarded with a deuce on a Muirhead takeout. But the Canadians, 7-6 winners over the U.S. in the Page three-four playoff game earlier on Saturday, answered back immediately, taking advantage of a miss from Scottish third Anna Sloan when she wrecked on a guard and raised a Canadian stone into the rings to leave Canada sitting two. Homan would eventually make the open draw for the game-tying deuce. The teams traded deuces again — both skips made hits for the two points — before Canadian pressure in the fifth end forced Scotland to take one in the fifth. Homan, though, was looking at three Scottish counters in the sixth when she had to draw for a single to tie the game 5-5. A wonderful pick from Homan in the seventh end left Canada counting two and again forced Muirhead to draw for a single. But in the eighth, early pressure from Canada — including a dandy split from Kreviazuk on second rocks that left her team sitting three — set up a promising end that was finished off with two magnificent draws from Homan to score two and give her team its first lead of the game. In the ninth, a wonderful hit-and-roll behind a centre guard early in the end from Weagle made it next to impossible for Scotland to get its desired blank. Homan’s double takeout then forced Muirhead to make the open hit to score one and tie the game, giving hammer to Canada for the 10th end. It will be the third meeting between Canada and the U.S. in Riga; the U.S. prevailed in their round-robin game earlier in the week before Canada’s triumph in the three-four game. “We’ve got to come back and battle,” said Miskew. “We beat them before and we’re just going to have to play our game again.” Sweden reached the gold-medal game after beating Scotland 7-5 in the Page playoff one-two game on Friday. This same Swedish team lost the gold-medal game to Switzerland’s Mirjam Ott in the final of the 2012 Ford World Women’s Championship in Lethbridge, Alta. Sweden’s Anette Norberg won the world title in 2011 at Esbjerg, Denmark. Scotland, meanwhile, hasn’t won a world women’s championship since Jackie Lockhart in 2002. Next year’s Ford World Women’s Curling Championship is set for March 15 to 23 in Saint John, N.B. For more information and to purchase tickets, go to: www.curling.ca/2014worlds/. Event news, live scores and galleries from Riga can be found on the event website: wwcc2013.curlingevents.com.