Alberta to play for double gold at CIS-CCA nationals

The University of Alberta will be represented in both the men’s and women’s gold-medal finals at the 2013 CIS Curling Championships on Sunday afternoon at the Kamloops Curling Club. The Alberta Pandas, skipped by Kelsey Rocque, downed the Saint Mary’s University Huskies 8-2 in the women’s semifinal on Saturday night. 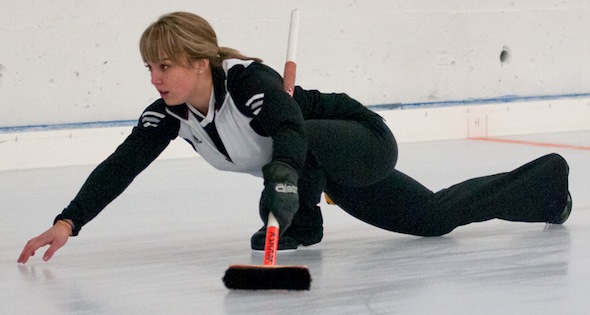 University of Alberta skip Kelsey Rocque will play for a gold medal at the 2013 CIS/CCA Canadian University Curling Championships after a semifinal victory on Saturday in Kamloops, B.C. (Photo, G. Wycherley Photography)

Rocque, who earlier in the day was named to the CIS All-Canadian First Team scored two in the second end and added singles in the third, fifth and sixth against the Sara Spafford-skipped Huskies. Saint Mary’s managed single points in the fourth and eighth ends, and will take home a bronze medal for the team’s efforts. Alberta will take on the University of Manitoba Bisons, skipped by Breanne Meakin, in the 2 p.m. (all times Pacific) final. It’ll be a rematch of the final round-robin contest earlier on Saturday, in which Manitoba won 4-3 to clinch a berth in the final. Like the women’s final, the men’s gold-medal game will pit the top two teams from the round robin head to head. The University of Waterloo Warriors will take on defending CIS champion University of Alberta for the gold medal after the Warriors’ semifinal victory on Saturday night. The final will feature a pair of former Canadian junior men’s champion skips — Jake Walker for the Warriors (2010) and 2012 world junior champion Brendan Bottcher for the Golden Bears, who topped the round robin. The Warriors advanced with a narrow 7-6 win over the host Thompson Rivers University WolfPack, skipped by Darren Nelson. Waterloo jumped out to an early 1-0 lead, gave two back to the ’Pack in the second before scoring three in the third. The teams traded singles before the WolfPack tied it with two in the ninth but couldn’t pull off the steal in the 10th. Thompson Rivers settled for bronze. Results, schedule and team information are available at www.curling.ca/championships/university/