Wayne Tallon took a long-awaited step to the top level of the podium at a Canadian curling championship on Sunday at the Silver Fox Curling and Yacht Club in Summerside, P.E.I. A three-time national runner-up (2000 Brier, 2008 and 2009 seniors, all with Russ Howard), the 56-year-old Tallon and his New Brunswick teammates (third and last-rock thrower Mike Kennedy, second Mike Flannery and lead Wade Blanchard) rolled to an 11-3 win over Ontario’s Howard Rajala in the men’s gold-medal game of the Canadian Senior Curling Championships 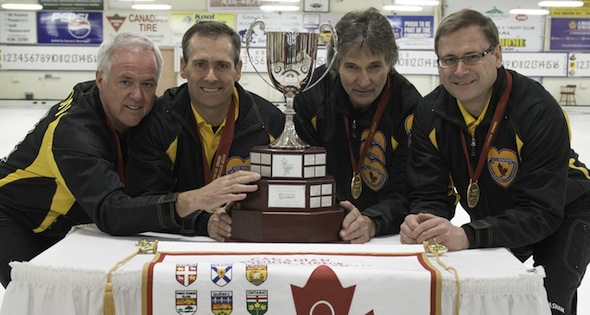 “I don’t it’s sunk in yet, but it certainly feels good,” said Tallon after the final. “To finally break the ice here is great. I’m no longer a national bridesmaid.” In the women’s final, Nova Scotia’s Colleen Pinkney claimed her second Canadian championship, scoring a stunning four in the ninth end to beat Alberta’s Deb Santos 7-6. Tallon and Co. sailed through the round robin with a 10-1 record to clinch a berth in the final. And they didn’t slow down in the gold-medal game. New Brunswick opened the scoring with a deuce in the second, a steal of one in the third and a crushing steal of three in the fourth against the Ontario champs from the Rideau Curling Club in Ottawa (the team was rounded out by third Rich Moffatt, second Doug Johnston and lead Ken Sullivan). “We really felt comfortable,” said Tallon. “We had a good practice (on Saturday) and this morning, we came out and had a good pre-game practice, and I asked the boys, ‘How are you feeling?’ They all said they were feeling great, let’s go. And my boys never missed a shot. They played great.” It was New Brunswick’s third victory at the Canadian senior men’s championship — Jim Murphy prevailed in 1967 at Montreal, while David Sullivan won the 1994 title at Moose Jaw, Sask. With the victory, the Tallon foursome will represent Canada at the 2014 World Senior Curling Championships (location and date TBD). But his first priority right now is putting the finishing touches on preparations for Fredericton hosting the 2013 World Seniors and World Mixed Doubles championships, beginning April 13 at the Grant-Harvey Centre. Tallon is the chairman of the host committee. “Well, we’ll probably have too much on the go to do any scouting,” said Tallon with a chuckle. “We’re trying to put on the best show we can to impress the International Olympic Committee so that they’ll consider including the mixed doubles in the 2018 Winter Olympics. That’s our priority.” Alberta’s Wade White (third Doug McLennan, second Dan Holowaychuk, lead George Parsons) took the bronze medal. 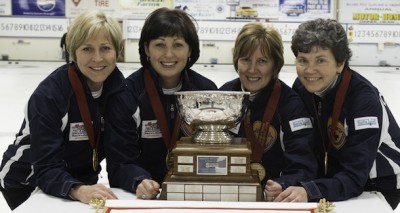 Pinkney’s victory wasn’t assured until her team made a series of come-arounds behind a centre guard, eventually leaving the skip with a draw to score four in the ninth to turn around a game that she’d been trailing 5-3 after an Alberta deuce in the eighth end. “I’m a little bit in shock but I really feel the curling gods were with us,” said the 56-year-old Pinkney, whose team, rounded out by third Wendy Currie, second Shelley MacNutt and lead Susan Creelman, was 10-1 in the round robin to earn the bye to Sunday’s final. “The first eight ends, we just weren’t in our rhythm at all and the other teams was just playing super. To come back and win it in the last two ends, I’m still in shock. But we’re absolutely thrilled and very excited.” Pinkney’s 2009 team also featured Currie and Creelman, and that trio combined with second Karen Hennigar to win the 2010 world senior women’s championship in Chelyabinsk, Russia. Now, she’ll get a another shot at gold at the 2014 world championships “We did it before, and we did manage to win the gold medal in Russia,” she said. “So we have some experience with that feeling. We have a whole year to prepare, which I think is wonderful. We’re just gobble up all the help and advice we can get.” It was the fourth Nova Scotia victory at the Canadian seniors: Verda Kemton won titles in 1982 at Montreal and 1987 at Prince George, B.C., to go along with Pinkney’s victory in 2009. The Santos foursome from the St. Albert Curling Club — third Jackie Rae Greening, second Diana Backer, lead Glenna Rubin — went home with the silver medal, while Manitoba’s Lois Fowler (third Gwen Wooley, second Lori Manning, lead Joan Robertson) won the bronze. The 2014 Canadian Senior Championships are scheduled for March 22-30 in Yellowknife.