The two schools won their respective gold-medal matches on the final day of the 2013 CIS/CCA Canadian University Curling Championships on Sunday at the Kamloops Curling Club. 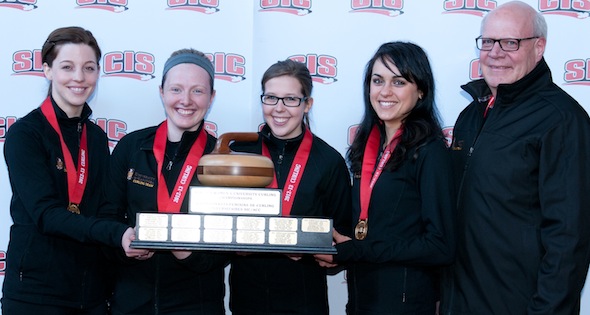 In the women’s final, the Breanne Meakin U of M foursome capped an unbeaten run through the five-day event with an 8-7 triumph over the University of Alberta Pandas, skipped by Kelsey Rocque. The Bisons opened up a 3-0 lead after two ends. But Rocque, the CIS first team All-Canadian skip (Meakin was named to the second team), and her foursome struck back quickly, taking the lead by scoring four in the third end. The topsy-turvy affair came down to the 10th end; the Bisons pulled to within one point after nine ends and then stole the winning deuce in the 10th for their first Canadian university curling title. Meakin’s gold-medal team was rounded out by third Ashley Howard, second Selena Kaatz and lead Krysten Karwacki, and coached by Tom Clasper. 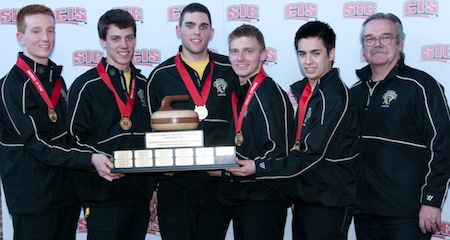 In the men’s final, Jake Walker showed why he earned first-team All-Canadian skip honours. The Waterloo skip curled an amazing 93 per cent in a 7-5 victory over defending Canadian University champion Brendan Bottcher and his Alberta Golden Bears foursome. The Golden Bears had opened the scoring with one in the second end, but the Warriors came back to take control of the game with a pair in the third end and a three in the seventh. Walker, the 2010 Canadian junior champion (Bottcher won Canadian and world junior titles in 2012), was backed up by third Edward Cyr, second Jordan Moreau and lead James Freeman, along with alternate Nathan Ransom and coach Scott Allen. On Saturday, the host Thompson Rivers captured the bronze medal on the men’s side while Saint Mary’s won the bronze in the women’s event. Former CIS/CCA men’s champions 2011-12 – Alberta 2010-11 – Memorial 2009-10 – Queen’s 2008-09 – Regina 2007-08 – Wilfrid Laurier Former CIS/CCA women’s champions 2011-12 – Wilfrid Laurier 2010-11 – Wilfrid Laurier 2009-10 – Regina 2008-09 – Wilfrid Laurier 2007-08 – Wilfrid Laurier