One of the youngest Canadian championship teams ever will open play on Saturday afternoon at the Save-On-Foods Memorial Centre in Victoria, B.C., in the 2013 Ford World Men’s Curling Championship, presented by Booster Juice. 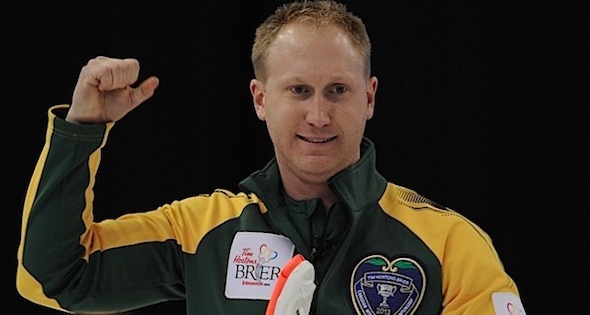 Brad Jacobs’ team from Sault Ste. Marie, Ont., which won its first Tim Hortons Brier Canadian men’s title on March 10 in Edmonton, will take on China’s Rui Liu at 2 p.m. (all times Pacific) in the first draw of the round-robin schedule. The event runs from March 30 to April 7. Jacobs, 27, is the youngest Canadian men’s skip to wear the Maple Leaf at a world championship since Kevin Martin did it in 1991 at Winnipeg at the age of 24. Jacobs will be backed up in Victoria by vice-skip Ryan Fry (34), second E.J. Harnden (29), lead Ryan Harnden (26) and alternate Matt Dumontelle (28). The team in Victoria is rounded out by team coach Tom Coulterman and national men’s coach Rick Lang. Team Canada will face a powerful field in Victoria that includes the likes of two-time world champion David Murdoch of Scotland, Sweden’s Niklas Edin and Norway’s Thomas Ulsrud, all of whom have world championship and Olympic experience. The field is rounded out by Jiří Snitíl of the Czech Republic, Denmark’s Rasmus Stjerne, Finland’s Aku Kauste, Japan’s Yusuke Morozumi, Russia’s Andrey Drozdov, Switzerland’s Sven Michel and Brady Clark of the United States. The 2013 Ford Worlds mark the 21st time that Canada has played host to the world men’s championship, and the fifth time the event has been staged in British Columbia (1966 and 1987 in Vancouver, 1998 in Kamloops, 2005 in Victoria). Canadian teams won at each of those events: Ron Northcott in 1966, Russ Howard in 1987, Wayne Middaugh in 1998 and Randy Ferbey in 2005 (beating Murdoch in the gold-medal game). The home team will be bidding to win a 35th world championship in the 54-year history of the competition, and will be looking to make four straight gold medals after Kevin Koe’s win in 2010 at Cortina d’Ampezzo, Italy, Jeff Stoughton in 2011 at Regina and Glenn Howard last year at Basel, Switzerland. In addition, Canadian teams have reached the podium 48 times in those 54 world championships, collecting eight silver and six bronze to go along with the gold medals. The 2013 Ford Worlds mark the 19th consecutive year of the Ford Motor Company of Canada serving as the title sponsor for Canadian-hosted world men’s and women’s championships. In addition to the medals on the line in Victoria, there will also be implications for the 2014 Winter Olympics in Sochi, Russia. The 2013 Ford Worlds are the final opportunity to secure qualifying points to gain entry to the Sochi Olympics. The top seven finishers based on results from the 2012 and 2013 World Championships, along with the host team from Russia, will be in the field. Two more teams will come out of a last-chance qualifying event in December 2013. It’s the third major curling event to be staged at the 6,500-seat (in curling configuration) Save-On-Foods Memorial Centre, which was opened in 2005 just prior to that year’s Ford World Men’s Curling Championship. The 2009 Scotties Tournament of Hearts, won by Jennifer Jones of Winnipeg, was also played there. Round-robin play will continue until Thursday, with the top four teams advancing to the Page playoffs, which see the first-and-second place teams playing for a berth in the April 7 gold-medal game (4 p.m.). The loser of the one-two game drops to the semifinal (April 6, 4 p.m.) against the winner of the Page three-four game. The semifinal loser and Page three-four loser will play for the bronze medal on April 7 at 11 a.m. TSN/RDS, the official broadcast partner of the Canadian Curling Association, will provide live coverage of Canada’s round-robin games, in addition to all playoff games. In French, all of the games will be shown live on RDS2 with the exception of the Canada-China game (no coverage) and the Canada-Scotland game on Sunday at 7 p.m. (to be shown on the RDS main network). Prior to the 2 p.m. opening draw on Saturday, the Ford Worlds will kick off with the opening ceremonies, beginning at 11:30 a.m. at the Save-On-Foods Memorial Centre. For the full list of team rosters, click here. For the official draw, click here.