Skip Trendal Hubley-Bolivar stole the first four ends against Newfoundland and Labrador’s Joanne MacDonald, then kept the pressure on to earn Nova Scotia its first win at the Canadian Wheelchair Curling Championship in Ottawa today. 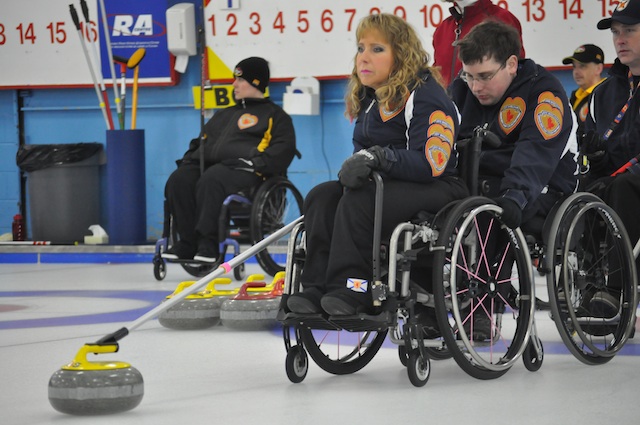 The team from the Lakeshore Curling Club in Lower Sackville, N.S., had a 5-0 lead heading into the fourth-end break. When MacDonald was able to score only a single in the fifth, Hubley-Bolivar’s deuce in the sixth was good enough for the 7-1 victory. An extended time out by the official meant British Columbia and Manitoba were on the ice long after the other games were done. Tied 4-4 after six ends, B.C. earned the 7-4 win after stealing a single in the seventh and two more in the eighth. In the meeting of the two undefeated teams, Northern Ontario’s Gino Sonego started with hammer and took two in the first end, but Quebec’s Benoît Lessard replied with points in the next three ends to go into the break up 5-2.  Northern Ontario scored a deuce in the fifth to close the gap. Quebec took one in the sixth, then stole four in the seventh end, and that was enough for Sonego to concede the game with the score 10-4. In other games, Alberta’s Bruno Yizek defeated Ontario’s Ken Gregory by a score of 6-3 after stealing points in the last two ends. Saskatchewan’s Darwin Bender and New Brunswick’s Michael Fitzgerals both scored four-enders to start the game, but it was Saskatchewan who poured it on for the 10-6 win. While Quebec (5-0) remains undefeated, and Northern Ontario (4-1) sits right behind, three teams are tied for third place with identical 3-2 records – Alberta, British Columbia, and Newfoundland and Labrador. Manitoba and Saskatchewan follow at 2-3, and Ontario, New Brunswick and Nova Scotia are tied at 1-4. Draw 6 will get underway at the RA Centre in Ottawa on Wednesday afternoon at 3 p.m. EDT. Teams at the Canadian Wheelchair Curling Championship will compete in a round robin from March 25-29, leading to the Page playoffs on Saturday, March 30. The semifinal will be played at 10 a.m. EDT and the final at 3 p.m. EDT on Sunday, March 31. Draw results and other event information will be available at www.curling.ca and https://www.curling.ca/championships/wheelchair