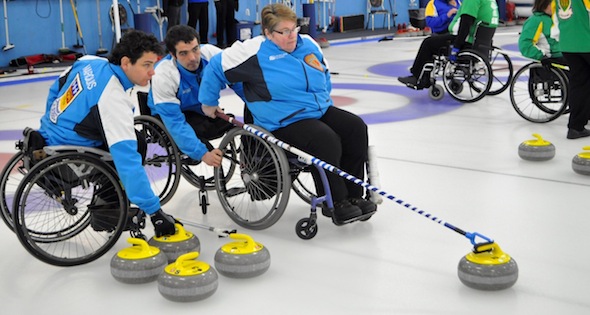 With the victory, Quebec improved to 6-0 in the 10-team round-robin competition, a win ahead of Northern Ontario’s Gino Sonego (5-1). Quebec took control early with a steal of three in the second end, and added additional three-point steals in the fifth and sixth ends before the teams shook hands, dropping Newfoundland/Labrador to 3-3 and still very much in the playoff picture. Northern Ontario, meanwhile, was also in a thieving mood. The Sonego foursome didn’t have the hammer to open the game, but it wasn’t an issue against New Brunswick’s Michael Fitzgerald as Northern Ontario stole single points in the first three ends, three more in the fourth and another single in the fifth and never looked back. New Brunswick dropped to 1-5 with the loss. One win back of Northern Ontario are Alberta’s Bruno Yizek and B.C.’s Gary Cormack after both posted victories on Wednesday afternoon to improve to 4-2. Alberta picked up a second-end deuce and then stole single points in the next three ends en route to a 6-3 win over Manitoba’s Chris Sobkowicz (2-4), while a steal of four in the fifth end propelled B.C. to an 11-4 win over Nova Scotia’s Trendal Hubley-Bolivar (1-5). In the other Draw 6 game, Ontario’s Ken Gregory improved to 2-4 with a 7-4 win over defending champ Darwin Bender of Saskatchewan (2-4). The Wheelchair Nationals continue on Thursday with games set for 12:30 p.m. (all times Eastern) and 5 p.m. Teams at the Canadian Wheelchair Curling Championship will compete in a round robin that wraps up on Friday, leading to the Page playoffs on Saturday. On Sunday, the semifinal will be played at 10 a.m. and the final at 3 p.m. Draw results and other event information will be available at www.curling.ca and www.curling.ca/championships/wheelchair. Live-streaming of games is available at: www.ustream.tv/channel/wcblog2.