Alberta and B.C. bring the leaders back to the pack at wheelchair curling nationals

The leaderboard at the Canadian Wheelchair Curling Championship in Ottawa took a hit today, as Alberta defeated second-place Northern Ontario and B.C. dealt Quebec its first loss of the round robin. 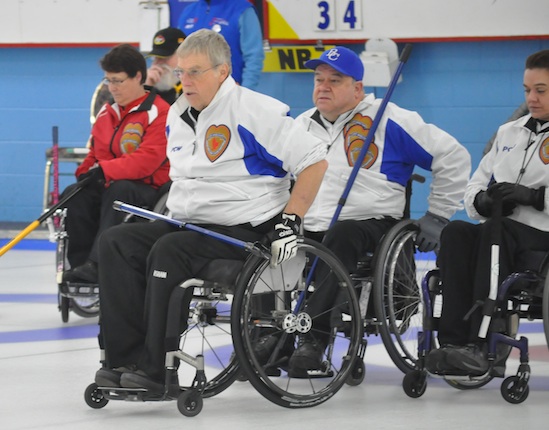 B.C.’s skip Gary Cormack prepares to deliver his rock in a 7-2 win over Quebec at the Canadian Wheelchair Curling Championship (Photo Morgan Daw)

Quebec’s Benoît Lessard and his team from the Magog Curling Club came into Draw 7 with a 6-0 record and were starting to look unbeatable, but they just couldn’t keep up with British Columbia’s Gary Cormack, a two-time Canadian champion, who got out to a quick start and never looked back. B.C. scored scored a single in the first, then stole three points before Quebec was able to get on the scoreboard with a deuce in the fourth. Cormack scored singles in the next three ends for the 7-2 victory. Alberta continued its climb up the standings by defeating Northern Ontario 8-6.  Bruno Yizek and his team from the Calgary Curling Club scored three in the fourth end to take a 5-3 lead. Northern Ontario’s Gino Sonego, from the Fort William Curling Club in Thunder Bay, couldn’t catch up, and Alberta’s single in the eighth end was enough for the 8-6 win. With the loss, Northern Ontario now shares second place in the standings with Alberta and British Columbia – all with 5-2 records – while Quebec retains first spot with a 6-1 record. In other Draw 7 action, Ontario’s Ken Gregory (3-4) defeated Nova Scotia’s Trendal Hubley-Bolivar (1-6) in a close game that had the spectators on the edge of their seats. Down by four with the last rock, Nova Scotia had a chance to score five to tie the game and send it into an extra end. But Hubley-Bolivar’s last throw was light and Ontario stole one to win 9-4. New Brunswick’s Michael Fitzgerald (2-5) and his team from the Thistle-St. Andrew’s Curling Club gave Newfoundland and Labrador’s Joanne MacDonald (3-4) and her team from the RE/MAX Centre in St. John’s all they could handle.  Although MacDonald started by stealing a double and a single in the first two ends, New Brunswick scored three in the third end, then stole a single for a 4-3 lead going into the break.  Fitzgerald went on to win 9-5. Saskatchewan’s Darwin Bender (3-4) started strong against Manitoba’s Chris Sobkowicz (2-5), stealing pairs in the first two ends without the hammer. Bender and his team from the Callie Curling Club in Regina kept the pressure on for the 7-3 win. Draw 8 gets underway at the RA Centre in Ottawa on Thursday at 5 p.m. EDT. Teams at the Canadian Wheelchair Curling Championship will compete in a round robin from March 25-29, leading to the Page playoffs on Saturday, March 30. The semifinal will be played at 10 a.m. EDT and the final at 3 p.m. EDT on Sunday, March 31. Draw results and other event information will be available at www.curling.ca and https://www.curling.ca/championships/wheelchair Live-streaming of games is available at: www.ustream.tv/channel/wcblog2. 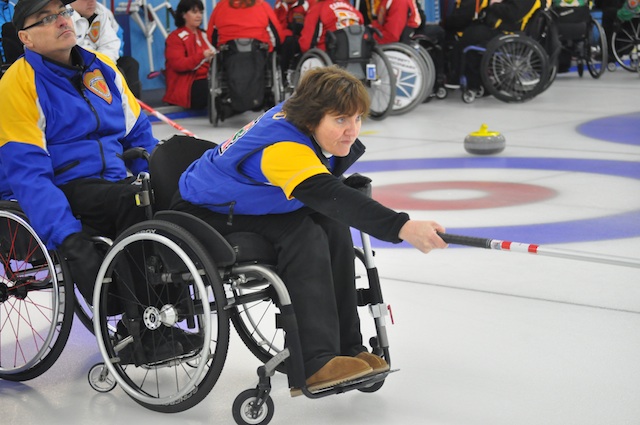