Teams lining up for playoffs at Wheelchair Curling Championship

Draw 8 produced a few surprises on Thursday evening as teams continue to fight for playoff position at the Canadian Wheelchair Curling Championship. 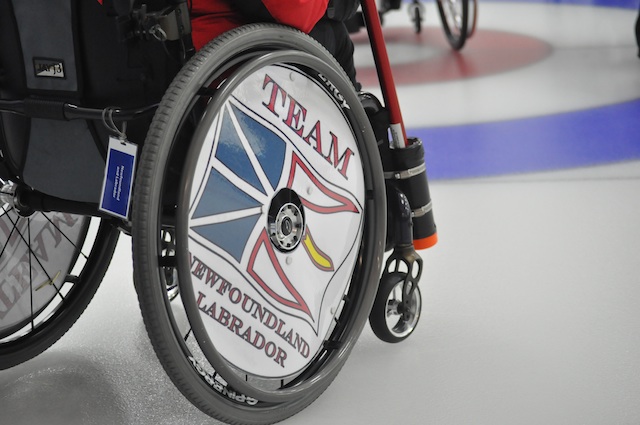 In the shocker of this draw, Newfoundland and Labrador, who has struggled since getting off to a strong start, recovered their form against Northern Ontario. Seven stolen points were the key, and Northern Ontario conceded after the seventh end with the score 11-2. In one of the other big surprises, Alberta led 8-2 over Nova Scotia after three ends and it looked to be a runaway. But Nova Scotia refused to quit and clawed its way back into the game by scoring four in the fourth end, and stealing points in the next three ends. In the eighth, trailing 10-8, Alberta was only able to score one, giving Nova Scotia’s Trendal Hubley-Bolivar the 10-9 win. In other games, Quebec remains alone in first place with a 7-1 record. Although Benoît Lessard and his team from the Magog Curling Club scored in only three of the eight ends, the nine points they earned were enough to give them the win over Saskatchewan by a score of 9-6. It was a game of steals for British Columbia and Ontario, who were tied 3-3 after five ends. Ontario stole three singles, but a stolen three points by British Columbia in the sixth end proved to be the difference in their 6-5 win. Both Manitoba and New Brunswick struggled with weight, and it was Manitoba who made the best of their chances to win by a score of 9-4. The all-important final draw gets underway at the RA Centre in Ottawa on Friday morning at 10 a.m. EDT. Quebec continues to sit at the top of the standings with a 6-1 record. British Columbia (6-2) takes over second place, followed by Alberta and Northern Ontario (5-3) who are tied in third, and Newfoundland and Labrador (4-4) alone in fourth. Ontario and Manitoba (3-5), New Brunswick (2-6) and Nova Scotia (2-6) round out the standings. Teams at the Canadian Wheelchair Curling Championship will compete in a round robin from March 25-29, leading to the Page playoffs on Saturday, March 30. The semifinal will be played at 10 a.m. EDT and the final at 3 p.m. EDT on Sunday, March 31. Draw results and other event information will be available at www.curling.ca and https://www.curling.ca/championships/wheelchair Live-streaming of games is available at: www.ustream.tv/channel/wcblog2.