B.C.’s Gary Cormack won a close 8-7 battle over Alberta’s Bruno Yizek in the semifinal of the Canadian Wheelchair Curling Championship today in Ottawa. Cormack, a two-time Canadian champion, will now meet Quebec’s Benoît Lessard in the championship final on Sunday afternoon. The game started cautiously, with a 3-3 tie after three ends. In the fourth, both teams had rocks positioned around the 12-foot. Yizek was forced to draw for the single and slid too far, giving B.C. the steal of two and a 5-3 lead heading into the break. 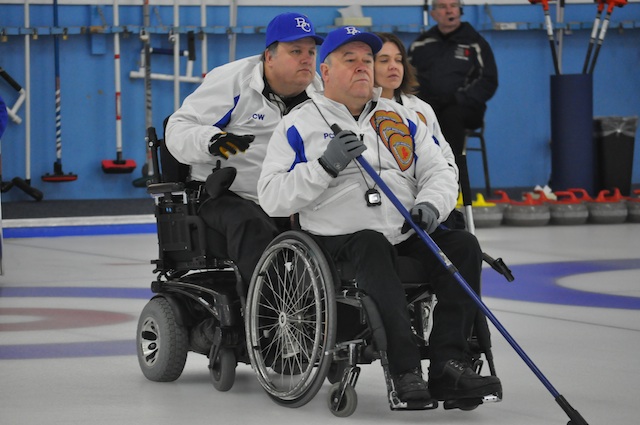 B.C. second Vince Miele prepares to throw his rock in the semifinal of the Canadian Wheelchair Curling Championship in Ottawa (Photo Morgan Daw)

B.C. pulled further ahead with another steal of two in the fifth. Trailing 7-3 in the sixth, Yizek was setting up for a possible two, but his take-out rolled too far and Alberta was only able score a single. In the seventh, Alberta applied pressure. Yizek positioned two rocks behind cover on the button and pressured B.C. into some misses for a steal of three and a 7-7 tie heading into the final end. With a potential steal developing in the eighth, Yizek missed a take-out with his last shot, leaving Cormack lying one without having to throw his last stone – and an 8-7 B.C. victory. British Columbia – skip Gary Cormack, Frank La Bounty, Vince Miele, Alison Duddy, Samantha Siu and coach Karen Watson, who represent the Marpole Curling Club in Vancouver and the Richmond Curling Club in Richmond – will play Quebec in the championship final at 3 p.m. EDT on Sunday afternoon. Draw results and other event information will be available at www.curling.ca and https://www.curling.ca/championships/wheelchair Live-streaming of games is available at: www.ustream.tv/channel/wcblog2.